The UK’s National Health Service, COVID-19, and the Price of Tory Austerity 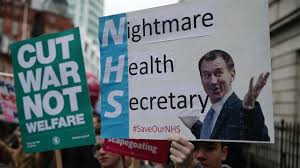 One of the most astounding statistics to emerge from the escalating coronavirus pandemic is how the death rate from the virus in Germany is markedly lower than other countries.

The reason for Italy’s high fatality rate and Germany’s comparatively low number of deaths in relation to confirmed COVID-19 cases have been the subject of much speculation and debate.

Despite both Italy and Germany having the oldest populations in the EU their extremely different COVID-19 death rates are associated with the quality of the different nations’ healthcare systems and how medical facilities are coping with the pandemic.

The World Health Organisation’s (WHO) emergency coordinator Michael Ryan affirmed that the better prepared hospitals are for pandemics and health emergencies, the more lives can be saved.

“When hospitals are overwhelmed by the number of patients, it’s a simple question of how far adequate care can be provided and whether you can respond to any change in the patient’s condition in the intensive care unit,” said Ryan.

Richard Pebody, an expert from WHO, describes three crucial factors in responding to this emergency as being the number of intensive care beds, well-trained staff in intensive care units and sufficient protective clothing.

Within the EU, Germany is the top healthcare spender. In 2015, Germany allocated 11.1% of its GDP on its healthcare system, well above the EU average of 9.9%. In the same year, when the then Prime Minister David Cameron pledged another round of austerity, the UK’s spending on healthcare was 9.8%, just below the EU average.

The Conservative government’s relentless austerity measures continue to come at the expense of the NHS. For much of the past decade, NHS staff pay increases have been capped at just 1%, meaning many suffered a pay cut in real terms.

Alongside real term pay cuts, NHS staff have had to endure cuts to training and changes to pensions, while patient demand has been rising. In 2019, the Royal College of Nursing’s (RCN) acting chief executive, Dame Donna Kinnair, said the NHS was losing thousands of dedicated staff because chronic staff shortages meant care was being compromised.

As Tory austerity continues to overwhelm the NHS, saving the UK’s crumbling health service has been a primary focus of activists and political opposition.

In 2018, tens of thousands of protestors gathered in London to protest the government’s crippling cuts to the NHS. The demonstration was organised by the People’s Assembly and Health Campaigns Together and came in response to what was then touted as the “worse winter on record for the NHS.”

In early March 2020, Britain’s recently formed Tory government delivered its first budget. The new chancellor, Rishi Sunak, pledged billions of pounds to soften COVID-19 impact. In response to the March Budget, Labour leader Jeremy Corbyn condemned the move as “too little too late” to make up for ten years of budget cuts. Corbyn also claimed the budget was an acknowledgement by the Tories that austerity had failed.

In 1948, when the NHS was founded, the then health secretary, Aneurin Bevan, proudly boasted that the NHS would become “the envy of the world.” At the time, Bevan’s claim held sizeable substance, with few other nations having any kind of functioning healthcare is place, let alone one that was universal and free.

The UK’s overstretched health service is resorting to desperate measures to accommodate for the influx of sick patients as the COVID-19 epidemic intensifies. Millions of planned operations are being postponed, patients are being urgently discharged and tens of thousands of retired medics are being asked to return to the NHS to help tackle the coronavirus outbreak.

The government’s latest move to help the NHS cope with the crisis was calling upon volunteers to work at the NHS to help the vulnerable. More than half a million people signed up to the volunteer scheme in less than two days.

On the evening of March 26, millions of Britons took part in a “Clap for Carers” tribute, a mark of thanks and respect for frontline NHS and care workers dealing with the COVID-19 pandemic. As posts of the emotional tribute flooded social media, so too were angry reminders of a time when, in 2017 in the wake of the Grenfell disaster in London, which saw residents of a tower block lose their lives in a fire, the Tories cheered in the House of Commons when they defeated Labour’s motion to give the NHS and emergency service workers a long-overdue pay rise.

While no-one predicted that a deadly virus was to ravish the world in 2020, taking thousands of lives in the process, the COVID-19 crisis cruelly underlines that healthcare can’t be economised.

Posted April 4, 2020 Social Policy, UK by Jason Schulman
About Author
GABRIELLE PICKARD-WHITEHEAD is a freelance writer based in the Peak District, UK.