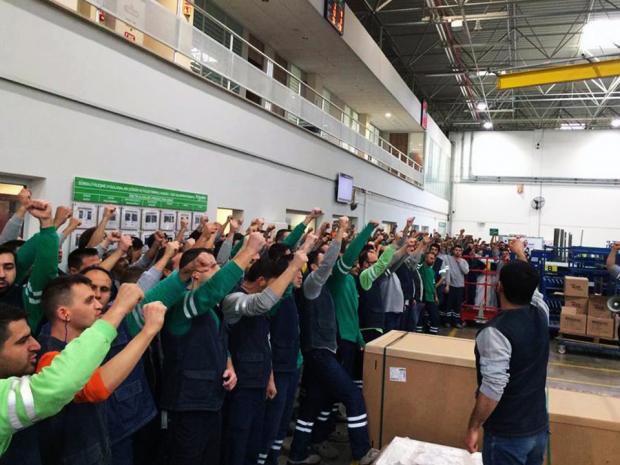 The Erdoğan-AKP government has banned the metalworkers’ strike crowning the collective bargaining process of fully 130 thousand workers. This is unlawful, illegitimate and unacceptable.

130 thousand metalworkers of Turkey declared a strike that was supposed to begin on 2 February 2018. The strike involves all three unions organised in the metal industry. Metal unions affiliated to three different confederations of absolutely contradictory ideological orientations are going on strike simultaneously. This fact alone is sufficient evidence of the urgency of the situation for the workers in this industry, since one of the unions, the largest, is a union that workers protested in their tens of thousands for its docility only two years ago and a second one is affiliated to the confederation controlled in hardly disguised form by the ruling AKP!

The strike is meant to fight the imposition by the bosses’ organisation of minimal wage raises in a situation where the metalworkers of Turkey already receive the lowest wages in comparable countries and work the longest hours with the lowest rate of absenteeism. As a novelty, the bosses also wish to extend the term of the collective bargaining agreement from the two-year period that is accepted as a rule across all industries in Turkey at all times to three years so as to be able to enjoy the benefits of low wages for a longer period of time.

The 130 thousand strong striking workers would be a sufficiently powerful force to fight the bosses, were it not for the prospect of the intervention by the AKP government of Recep Tayyip Erdoğan on the side of the capitalists, mostly large joint ventures between Turkish and foreign imperialist corporations such as Ford Otosan, Renault, Mercedes, Tofaş (subsidiary of the Italian Fiat) and others. This government has banned three metalworkers’ strikes in the last three years, as well as large strikes in the glass, petrochemicals and banking industries. President of the republic Erdoğan himself has openly boasted in the past more than once that his government is using the State of Emergency, declared in response to the failed coup attempt in July 2016, to stop strikes!

We support the just struggle of the metalworkers of Turkey against the imposition of unacceptable terms by the capitalists and declare our full solidarity against intervention by the government in the lawful right to strike by banning this very important action under whatever pretext. We call on working class forces in all countries to turn their attention on this strike: Erdoğan’s regime has been rightly criticised for its increasingly despotic practices. Banning a lawful strike is a clear example of those practices and exposes the Erdoğan regime for what it is: a government in the service of the bosses against the struggle of the working class.

Metalworkers of Turkey, we are in solidarity with your action!