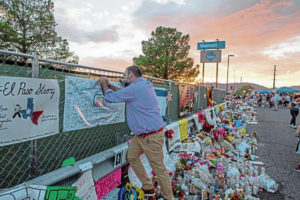 The intense revulsion over the horrific slaughter in El Paso has shifted politics. But beware of ruling class solutions to crises caused by the ruling class.

The revulsion at white supremacy has even forced a temporary change in Trump’s rhetoric. On August 5, he denounced both racism and “white supremacy,” a marked contrast to his response to Chalottesville in August 2017 when he praised the “fine people” on both sides.

The likely response of fascists is to see it as a wink and a nod, something he was politically required to do and doesn’t mean. A TV clip from a rally in the Florida panhandle shows Trump nodding and laughing as an audience member calls for shooting people who cross the border. But the liberal response, to create a new crime of “domestic terrorism,” will likely ramp up repression of the Left and people of color. Senator Ted Cruz has already called for naming Antifa a terrorist “organization.” And Trump’s willingness to take guns away from particular people would no doubt take weapons from his political opponents and scapegoats – blacks, other people of color, and victimized groups.

Though the movement against gun violence especially by young people is a positive sign, each measure of gun control needs to be assessed on its merits. Removing the ban on health and safety research on gun violence would be a step forward. So would allowing law suits against gun manufacturers and banning the production of assault rifles. Background checks are quite popular but in today’s climate would be applied in a racist way and against poor people.

The U.S. government, as said by Dr. Martin Luther King Jr., is the “greatest purveyor of violence” in the world. With an average of over 1,000 civilians killed by police in the U.S. every year, guns in the hands of police are a major source of the gun death problem. Gun control advocates should take up disarmament of the police and military as a major priority. Not only would this cut the number of gun deaths but it would also reduce the fetishization of guns in society. (For more discussion of a socialist view on gun control see Danny Katch’s excellent piece in Socialist Worker.)

Trump’s identification of mental illness as a source of mass killing is much debated, and it is important to oppose attempts to further victimize the mentally ill, as Trump intends – for instance by increasing the use of involuntary commitment. Obviously, quality mental health services aimed at creating loving, empathetic, socially engaged, egalitarian, humane people would be a step forward. Many practitioners try to do this. But funding for such mental health services are limited.

What is considered mentally ill is based on the prevailing ideology. Obviously no fully mentally well person walks into a public place and slaughters multiple strangers. But the mental state of individuals is reflective of the societies they live in. The issue of mental illness is not generally raised about other horrific acts. Were the government officials who decided to drop the first A-bomb on Hiroshima mentally ill? How about the drone pilots who sit in trailers in Las Vegas and slaughter civilians from afar?

Is the idea of using nuclear weapons in war mass insanity? Could it be cured by enough psychiatrist couches and proper meds?

Politicians who express horror at the events of El Paso and Dayton vote without apology to spend trillions of dollars on a military budget and foreign policies that kill tens of thousands of civilians. They shed tears over the children of El Paso killed by a violent racist, but shed few tears over Palestinian children killed by Israel, the largest recipient of U.S. aid. They say it is wrong to kill 20+ innocent victims on U.S. soil, but they don’t notice it when the same number of innocent Iraqis, Afghans, Yemenis are slaughtered via U.S. bombs, dollars and political support.

The individual mental status of mass murders has to been seen in light of the values and operation of our sick social system, capitalism, that prioritizes profit over human needs. It institutionalizes and justifies racism, misogyny, war, environmental destruction. The problem is not aberrant mental illness but sick capitalist normalcy.

The level of alienation that capitalism produces is so great that the wonder is that there are not more episodes of mass slaughter. Human compassion, solidarity, and sociability are constantly at war with the nasty, individualistic, patriarchal training of capitalism. We can only marvel at the examples of heroic self-sacrifice reported in every situation like El Paso. There is a constant war for the soul of humanity and capitalism is doing all it can to win the war against human decency.

Finally, we need to look at how politicians are using this tragedy. Obviously, politicians who criticize Trump are correct to do so. However, the Democratic Party politicians are responsible for the conditions that cause El Paso as well. The Democrats continue to preside over a system that spends trillions on warfare but cannot fix crumbling roads and bridges, provide affordable education, ensure access to decent health care that won’t end in medical bankruptcy, or provide enough jobs that pay a living wage.

Democratic politicians are quite willing to oppose Trump’s open racism. However, they are not willing to do anything about the racist conditions that are the basis of racist attitudes.

For example, they oppose Trump’s new border wall, but they have voted for border fences and walls in the past. More fundamentally, they are mostly for “comprehensive immigration reform.” This is founded on a racist premise: that people should be granted and denied rights based on where they were born.  It legitimates deportation and the breakup of families – whether in the “kind” Democratic way or the nasty Republican way. Any form of border control legitimates discrimination against people based on national origin. In U.S. conditions, this discrimination will always be exercised in a racist way. Hispanics and Blacks are much more likely to be arrested and deported than white Europeans. Obama deported more people than any previous president.

Confronting the conditions that cause racism would require a direct confrontation with capitalism. Democrats are unwilling to do this since their party is funded and run by big business.

Those who really oppose future slaughters like the one in El Paso cannot rely on politicians to alleviate the problem. We need to directly confront white supremacist movements but also the conditions that encourage racism and misogyny. We need to provide a positive alternative to the misery that people face. We need to focus the anger people feel on the capitalist system and those who benefit from it – rather than on other oppressed members of the working class.