The State of Anti-Austerity Struggles in Greece

In recent years Greece has come to exemplify the attempt of capitalist elites to respond to the global capitalist crisis through an attack on the rights and living standards of workers and ordinary citizens around the world.

Europe at a Dark Crossroads: Letter from France

When New Politics asked me this July to write a piece about France under the new Socialist government, I excitedly drove out to Serviers-et-La Baume — my Provençal sweetheart Elyane’s little village located in the heart of la France profonde — to interview her rural neighbor Robert about this big change (and sip some of his home-made plum brandy).

We Stand with the Greek People Fighting Austerity, For Their Sake and Ours

SEPTEMBER 2012—What is happening today in Greece is only the most extreme example of a global phenomenon: the world’s political and economic elites, who are responsible for the current economic crisis, want to make the rest of us pay for that crisis, no matter how much suffering this creates. 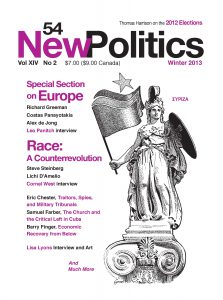 From the Editors
Special Section: Europe

Statement on Greece, Campaign for Peace and Democracy
Europe at a Dark Crossroads: Letter from France, Richard Greeman
The State of Anti-Austerity Struggles in Greece, Costas Panayotakis
The Netherlands: Neoliberal Dreams in Times . . .