Sartre and the Idea of Freedom in the Anti-Colonial Struggle

In the late 1960s it seemed to many almost certain that Jean-Paul Sartre would be remembered as the most important philosopher of the twentieth century and the most important public intellectual on the left of that era. Certainly it seemed so to me at the time. Sartre had in the 1930s taken Martin Heidegger’s Being and Time and its reactionary and religious version of phenomenology and transformed them in Being and Nothingness into his new humanist philosophy of existentialism, a leftwing philosophy of freedom. Global Governance and Revolution in the 21st century: Strikes, Austerity and Political Crisis

GLOBAL GOVERNANCE IS ARGUABLY THE NAME for what might pass these days for "a committee for the management of the affairs of the bourgeoisie as a whole" – though we should recall that the much repeated phrase by Marx and Engels stated that "the executive of the modern state" filled this role, not, for instance, the legislature or other state institutions. 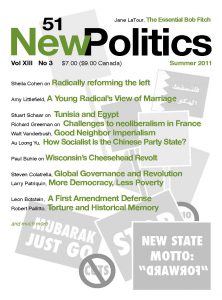 From the Editors
The Essential Bob Fitch, Jane Latour
Worldwide Demonstrations and strikes