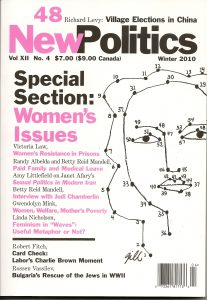 An exchange on Anarchism and Socialism: Wayne Price and Marvin Mandell

STATEMENT ON THE U. S. WARS IN AFGHANISTAN AND PAKISTAN, Campaign for Peace and Democracy
SPECIAL SECTION: WOMEN’S ISSUES

END_OF_DOCUMENT_TOKEN_TO_BE_REPLACED

Go back to part 1

The Rescue of Bulgaria's Jews in World War II

On February 13, 1998, Bulgarian President Petar Stoyanov accepted on behalf of his ex-Communist nation the Courage to Care Award, which the Anti-Defamation League (ADL) had bestowed upon Bulgaria in recognition of the heroism of its people in saving Bulgarian Jews during World War II.

Sometimes the story is just an appendage to the back-story. What it means for Sisyphus to watch his rock roll back down the hill can't be understood unless we know it was not exactly the first time. Organized labor's recent effort to move the Employee Free Choice Act — popularly known as "card check" — up Capitol Hill involves a similar back-story.

END_OF_DOCUMENT_TOKEN_TO_BE_REPLACED

Iranian Workers say: "We have nothing to lose but our unpaid wages"

Half a year after the demonstrations of June, 2009 in Iran, it is probably easier to examine in more depth the events that changed the country's political landscape. The bourgeois media in Iran and abroad is unanimous: the presidential elections of June 2009 and predictions of a Moussavi victory gave hope that change within the exiting regime was possible; millions of Iranians took part in the elections; the regime rigged the results; the rest is history.

Nor Meekly Serve Her Time: Riots and Resistance in Women's Prisons

IN 1974, WOMEN IMPRISONED at New York's maximum-security prison at Bedford Hills staged what is known as the August Rebellion. Prisoner organizer Carol Crooks had filed a lawsuit challenging the prison's practice of placing women in segregation without a hearing or 24-hour notice of charges. In July, a court had ruled in her favor. In August, guards retaliated by brutally beating Crooks and placing her in segregation without a hearing.

Do elections of self-governing Village Committees in China's signify a major step towards democracy? How, if at all, do these elections affect power relations among various groups, class strata, and nascent or even actual classes in the Chinese countryside? Inside and outside of the villages, who makes decisions about how the village will evolve or develop?

Why We Need a Global Green New Deal

The United States, and with it the rest of the world, is experiencing the initial stages of an unprecedented emergency brought on by three intertwined factors: a credit-fueled financial crisis, gyrating energy prices linked to speculation about the future peaking of oil supplies, and an accelerating climate crisis.

What Happened to the American Working Class?

The collapse of the financial sector of the United States detonated the current global economic crisis, and its auto industry was soon crumpling as well.[1] Yet, though it all began here, American labor unions and workers have been slow to respond and their response has been weak. Millions of workers in hundreds of French cities have struck and demonstrated repeatedly against their government and against the banks and corporations throughout the spring of 2009, and the story was similar in Italy and Greece.

Feminism in "Waves": Useful Metaphor or Not?

By the early 1990s, it had become clear that the kind of feminist activity that had blossomed from the late 1960s through the late 1980s in the United States was no longer present. Consequently, many began to ask: what was the present state of feminism?

In the 2008 Democratic Party platform, the only provision with women in the title was one promising "Opportunity for Women." The provision pledged "that our daughters should have the same opportunities as our sons,"1 confining measurement of women's equality to our access to men's jobs and men's wages. The nomination, then election, of the first African-American presidential candidate portended and promised great change.