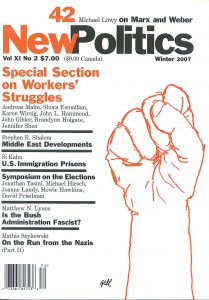 END_OF_DOCUMENT_TOKEN_TO_BE_REPLACED

Socialists, Democrats and Political Action: It's the Movements that Matter

The following is a slightly expanded text of remarks given at a pre-election debate on the topic, "Is a Progressive Democratic Party Possible." Michael Hirsch, representing the Democratic Socialists of America, spoke for the affirmative, as did Al Ronzoni of Progressive Democrats of America. The negative argument was given by Howie Hawkins of the New York State Green Party and Danny Katch of the International Socialist Organization. The event was held at New York City's Judson Memorial Church on Nov. 3, 2006.

The Democratic Party and the Future of American Politics

The Political Economy of Psychotherapy

In the U.S. today, psychotherapy, or for that matter any study of the psychodynamics or interpersonal processes involved in mental and emotional difficulties in living, is on the wane. The cause of the decline is the subject here, but to understand it, it must be viewed in the context of the changes to health care in general that have taken place in the past several decades in the U.S.

Advocates on both sides of the abortion issue have made sure that the anniversary of Roe v. Wade on January 22 is highly visible. Supporters and opponents use the date to rally their forces. In contrast, September 30, the date in 1976 that federal Medicaid funding for abortion was banned by the Hyde Amendment, has not gained the same attention.

("Ulises told us: no marches and no protests. Here we'll show him that we're more badass than he is.")

The World Social Forum and the Emergence of Global Grassroots Politics

[This is an expanded and documented version of an article that appeared in New Politics, no. 42.][1]

Is the Bush Administration Fascist?

The idea that the Bush administration is imposing fascism on the United States has become increasingly commonplace in leftist and liberal circles. It's often taken as a given in political discussions, at protest rallies, and on the Internet. Sometimes this is little more than name calling, but over the past six years, a number of critics have offered serious arguments to back up the claim, and the claim deserves serious attention.

"What we're seeing here, in a sense, is … the birth pangs of a new Middle East…."