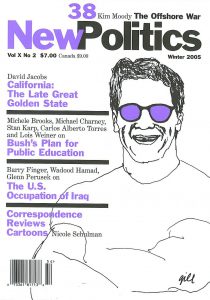 California: The Late Great Golden State, David Jacobs
The 2004 Elections and the Collapse of the Left, Thomas Harrison
The U.S. Occupation of Iraq: Three Perspectives

We are pleased to present three distinct viewpoints on the ongoing U.S. occupation of Iraq. Each contribution . . .

END_OF_DOCUMENT_TOKEN_TO_BE_REPLACED

Inside the House of Labor

While the labor movement in the United States is a beacon for democracy, too often it fails as a beacon of democracy. Herman Benson makes this clear in his remarkable personal memoir, Rebels, Reformers and Racketeers: How Insurgents Transformed the Labor Movement.

Does Buhle Ask Union Democracy to Save the World?

It is difficult to know just what Paul Buhle is driving at; it's even more difficult to figure out what relevance his remarks have to what I wrote in New Politics about the undemocratic leanings of the New Unity Partnership.

Neoliberalism, Teacher Unionism, and the Future of Public Education

With overwhelming support from both Democrats and Republicans, the Bush administration rewrote the Elementary and Secondary Education Act (ESEA) in 2001, drastically changing public education. One of the key initiatives of the Johnson-era "war on poverty," ESEA has been the main source of federal aid to schools serving children in poverty.

No Child Left Behind: A Brainchild of Neoliberalism and American Politics

Neo-liberalism and neoconservatism are in the driver's seat right now and this is not only happening in education.

It is a measure of how far the right is reaching that the left today finds itself defending the very existence of public education from the forces of privatization, commercialization, and even federal policy. Just four years after 1996 Republican presidential candidate Bob Dole campaigned on a platform of abolishing the Department of Education, the Bush administration came into office with a massive expansion of the federal role in education as its number one domestic priority.

Thank God for Utah. The potential triumphalism of George Bush and his hold the course view of No Child Left Behind can be blunted. The Utah legislature set the tone in early 2004 with its frontal assault on the arrogance of the federal government in micromanaging the accountability standards of Utah's classrooms. The Utah legislature was on the verge of totally rejecting the federal funds following NCLB before the U.S. Department of Education sent emissaries to Salt Lake City to calm down the cry for state control.

Ask any parent what their hope is for the education of their child and they will tell you "a good education is one that provides my child with a broad range of opportunities and experiences to gain the knowledge and skills to be successful in life." Parents, especially those in disadvantaged communities and parents of color, whose children attend underperforming schools, want accountability.

With overwhelming support from both Democrats and Republicans, the Bush administration employed the rhetoric of equity and accountability to forge a legislative package called “No Child Left Behind” (NCLB). NCLB was an omnibus bill that contained numerous provisions that made federal aid to low-income schools and children dependent on schools’ accepting new regulations on a host of school policies, from qualifications for teachers to the kinds of instructional materials that can be used.

The 2004 Elections and the Collapse of the Left

The best lack all conviction, while the worst
Are full of passionate intensity