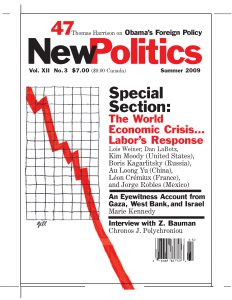 THE GLOBAL CRISIS AND THE WORLD LABOR MOVEMENT, Dan La . . .

END_OF_DOCUMENT_TOKEN_TO_BE_REPLACED

IT’S TRAINED ELEPHANTS linked tail to snout contending with accursed builders of The Tower of Babel. That’s pretty much how defenders of discourse on class and identity caricature their opposite theoretical numbers. Not so Joseph Schwartz, who shows why such binary thinking is dangerous. Schwartz instead places economic inequality and politics back into discussions of identity and difference. It’s about time.

IN HIS INTRODUCTION to the Winter 1998 New Politics symposium (Vol. VI, No. 4) marking the 150th anniversary of The Communist Manifesto, Julius Jacobson, co-editor and co-founder of this journal, noted that “symptomatic of the crisis in Marxism” is not only the “failure of the working class to act as the agency for social transformation but the changing nature of the working class itself which is a legitimate area of concern and debate” (p. 47).

After Israel's Invasion: An Eyewitness Account from Gaza, the West Bank, and Israel

Gaza: War on Civilians in the World’s Largest Open-air Prison[1]

AS NOAM CHOMSKY OBSERVED, “Obama’s message of ‘hope’ and ‘change’ offered a blank slate on which supporters could write their wishes” (Znet, Nov. 25, 2008). Millions voted for Barack Obama in order to reverse the brutal and catastrophic foreign policy of the Bush Administration, especially the war in Iraq. But as far as fundamental change is concerned, his first months in office (this is being written in mid-April) offer no real grounds for hope. WAYNE PRICE’S THE ABOLITION OF THE STATE is a well considered, well researched, and well written book. I shall try to summarize his major points in the first several chapters. Chapters 9, 10, and 11 deal with the failure of revolutions in Russia and Spain and the success of the counter-revolution in Germany, and I shall discuss them as well.