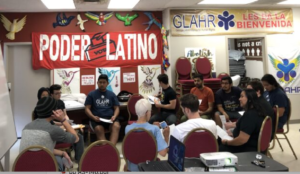 In his article on developments in the Democratic Socialists of America as the organization approaches its 2021 convention, Andrew Sernatinger states: “A priority campaign over immigration received overwhelming support from delegates [at the last convention, two years ago] but never materialized.”

In reality, coming out of the 2019 convention, the national Immigrants’ Rights Working Group (IRWG) spearheaded a national day of action. Planning calls brought in members from across country, culminating that October with actions in 27 cities to #CloseTheCamps, including Chicago, Los Angeles, Newark, and Atlanta just to name a few.

Take the example from Atlanta DSA. The chapter’s immigrants’ justice working group organized a #CloseTheCamps action alongside the Georgia Latino Alliance for Human Rights (GLAHR), Project South, and Black Alliance for Just Immigration to name a few local partners with grassroots working class and undocumented base. Today, Atlanta DSA works with those partners as part of the Close the Jail Atl coalition.

A key component for this work is the sensitivity of organizing in immigrant and undocumented people’s communities. And that sometimes means our role is not in the spotlight. The 2019 mandate called for “immigrants and their communities to lead this struggle and determine its tactics.” This was reflected in the #CloseTheCamp coalitions. The relationship and trust building between bases takes time and showing up is just the start.

In addition, the 2019 convention mandate called for the IRWG to “coordinate activities listed in this resolution and develop a program of education on the history and political economy of immigration, as well as how to argue against right-wing positions and respond to provocations.” To fulfill this, the IRWG created a getting-started Immigrants’ Rights Organizing Guide for chapters and at-large members, this was updated and followed up with an Organizing Action toolkit, with resources that have been helpful for different chapter’s work.

Shifting into COVID, the IRWG focused on producing educational materials by recording webinars covering Immigrants’ Struggles in the Time of COVID featuring comrades in the struggle exposing human rights abuses at ICE detention centers, winning union contracts for indigenous migrant workers, dairy farm workers in Vermont calling on dairy companies to ensure respect for human rights in their supply chain, and the importance of workers’ centers as a place for workers to learn about their rights and organizing. We partnered up with AfroSOC and MiJente for the Eyes On ICE: Stories of Struggle and Resistance forum. And a tremendously successful all in Spanish webinar Quienes somos y qué queremos los Socialistas Democráticos. These resources were created to fulfill the mandate of convention and helped see a 47% growth in the IRWG.

Resolution #1 , “On the Defense of Immigrants and Refugees,” reaffirms our commitment to building with working-class communities of color currently outside of DSA. According to the recent chapter survey from the Growth and Development Committee, at least 31 chapters have a formal immigrants rights group and 50 others are interested in forming one. This work, centering the communities impacted means DSA is not always the visible partner; and until the makeup of our base changes, we should not be expected to be leading, but continue to prioritize relationship building and learning to listen to these communities. The heart of these efforts is to educate, agitate, and organize. The best thing we can do now is continue to build on the lessons from the past two years.

Alexander Hernandez is a co-chair of the National Immigrant’s Rights Working Group of DSA and a member of Atlanta DSA.
Posted June 17, 2021 Immigration by Scott McLemee