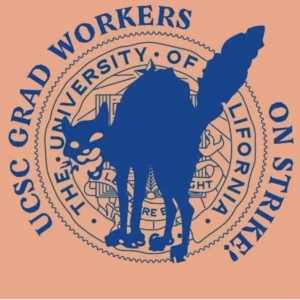 We, undersigned members of East Bay DSA, stand in solidarity with striking student-workers at UC Santa Cruz, UC Davis and UC Santa Barbara who are fighting for a cost-of-living adjustment. We also stand with those who are organizing to start strikes on other campuses such as UC Berkeley where many of our fellow East Bay DSA members work and study.

As socialists, we affirm the right of workers to withhold their labor. The strike is one of the most potent tactics available in our struggle for a decent life and a just world. All workers deserve our solidarity whenever they assume the risks associated with that struggle, even when they do so against the wishes of union officers.

The strike that started at UC Santa Cruz and then spread to other campuses is a wildcat—it was initiated by rank-and-file workers themselves, not their legal collective bargaining agent, UAW 2865. Many important battles in the history of our movement have been wildcat strikes, including the Spring 2018 public K-12 strike in West Virginia that started the ongoing public education stikewave. Strikes are no less legitimate for being wildcats.

Graduate student instructors at UC Santa Cruz began withholding undergraduate grades in December and walked off the job entirely in early February. Their strike was met with intense police violence and numerous arrests. 82 strikers were recently fired. This repression was intended to intimidate the rest of the movement, but the opposite occurred. More workers have joined the strike since the firings and it has spread to UC Davis and UC Santa Barbara. But the firings still set a dangerous precedent and they must be opposed without qualification.

This strike is currently one of the defining labor struggles in the United States. The UC is the single largest employer in California, and one of the largest landlords in the state. The wildcat has moved UAW 2865 towards supporting a cost-of-living adjustment campaign that could culminate into an unfair labor practices strike backed by union officers. So, this battle may continue for some time. And, since many UAW 2865 members are also DSA members, the outcome will carry an outsize meaning for the future of socialists in the labor movement.

East Bay DSA cannot stand aside from this struggle. The DSA national political committee issued a statement of support for the strikers as early as December 20. The East Bay DSA labor committee recommended to the chapter steering committee in early January that they also issue a statement of support. But a majority on the East Bay DSA steering committee did not follow this recommendation and instead decided against issuing a solidarity statement. They also refused to share the national statement with local membership. Chapter leaders cited concern that the DSA remain neutral in what was really a dispute that was internal to UAW 2865. But no neutral sanctuary exists when workers confront their bosses.

The strike has since spread to other campuses and its significance is that much greater. Even Bernie Sanders made a statement condemning the recent firings. The East Bay DSA should urgently correct the error made by withholding solidarity from the UC wildcat strike.