Dear Liberals, Greta Thunberg is Talking to You! 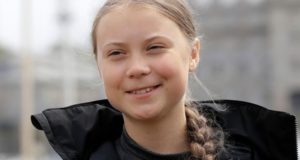 When 16-year-old climate activist Greta Thunberg ascended to the helm of climate politics, the American right naturally assumed that her words were leveraged at them. And who could blame them? As the only major group of people on the planet still in denial about the impending ecological crisis, American conservatives are paranoid that every mention of climate change is a rhetorical assault on conservatism itself. Fox News and the like responded by comparing this 16-year-old girl to the Children of the Corn and by calling her “mentally ill” in a not-so-surprising display of tasteless insults and ad hominem attacks.

This time around Fox News was mistaken, and so were the enlightened liberals that attended her speech at the UN. Of course, both groups were too absorbed with narcissism to notice that they had misinterpreted Thunberg’s speech, which is why the UN found her charming while Fox News found her repulsive. But those of us that are not steeped in the establishment circle jerk could hear Thunberg loud and clear. She was talking to the liberals.

Greta Thunberg opened her speech by saying “my message is that we’ll be watching you,” and this was met with applause and laughter from the audience, who clearly didn’t understand the gravity with which Greta spoke. She then continued, saying “This is all wrong. I shouldn’t be up here. I should be back in school, on the other side of the ocean. And yet, you all come to us young people for hope? How dare you?” She says, her voice quivering with emotion. The audience has grown silent now. They likely expected this girl to give a naïve but inspiring speech about how “everyone can make a difference if they just believe.” And yet, here’s this little girl sounding rather accusatory. The UN summit agrees with Greta on one thing: this is all wrong.

She continues: “you have stolen my dreams and my childhood with your empty words and yet, I’m one of the lucky ones. People are suffering, people are dying, entire ecosystems are collapsing, we are in the beginning of a mass extinction and all you can talk about is money and fairy-tales of eternal economic growth. How dare you?” She says. The second “How dare you?” manages to be more impactful than the first but, for reasons that can only be attributed to the vast stupidity of modern liberals, the uncomfortable silence that has sunken in is broken by applause from the very people she’s railing against. Her speech continues to be abundantly clear in its message. She speaks with apocalyptic dread, like a doomsday prophet condemning the sinful before the end times. And she speaks right past Trump’s conservatism, directly to the heart of liberalism, the heart of the problem.

Thunberg understands something that scientists, politicians and activists have misunderstood about climate politics for decades now. Thunberg understands that the problem isn’t with delusional conservatives who would deny the existence of a basic scientific fact, but rather, the problem is with those politicians who “accept the science” but are too spineless and cowardly to put forward solutions that are radical enough to actually solve the problem. The Nancy Pelosi’s of the world, who would admit that climate change exists but would shy away from a Green New Deal program in favor of meager solutions that no serious person believes will even leave a dent in our outsized carbon footprint. Thunberg understands that Laura Ingram, Tucker Carlson and Donald Trump are too far gone to be worth trying to convince of anything.

The Democrats on the other hand, should know better. This is their issue after all. Thunberg sees this and it’s why her speech doesn’t aim to convince anyone that climate change is real, she knows she can’t convince those people. Instead, she speaks with anger and disgust at a generation of ineffectual liberals who pretended to care about the environment but were too cowardly to propose real solutions. Instead, she points out all the failed policies that have been put forward and she reminds her audience that it’s her generation who will be cleaning up after their irresponsible behavior.

Thunberg doesn’t offer us solutions and while I would take her solutions over anyone in congress, it’s disturbing that we live in a world that needs to seek answers from a teenager. She may be too young to have a structural understanding of the politics but only a teenager could possible articulate the anger and frustration of a generation that was born to die. A generation who was cursed to watch their parents fuck it all up and then leave the mess for their kids to clean up. While she is young, Greta’s not the naïve one, instead her audience has all the naivete that she was expected to have. It reminds me of a passage from Elie Wiesel’s Day.

“The young today don’t believe that some day they’ll be old: they are convinced they’ll die young. Old men are the real youngsters of our generation. They at least can brag about having had what we do not have: a slice of life called youth.”

This quote was written for another generation, but it seems to capture the essence of Greta Thunberg’s speech perfectly. It’s no longer the young people that are drunk on optimism, but rather the old people. The old people know they’ll die before humanity suffers the consequences of its own avarice, so they can afford to have the blissful optimism required to believe that this problem will go away without a mass mobilization of our economy. They’ll never watch portions of the Earth become unlivable, they’ll never experience mass extinction, mass migration or starvation the way that their children will, so when someone comes along with a truly radical solution to the ecological crisis that involves a radical restructuring of our economic and social lives, that solution is simply too scary for people who won’t have to deal with the consequences of failure. And so, the old people move along with stars in their eyes, certain that innovation and technology will save them so long as they keep their faith in capitalism.

If we’re lucky, when capitalism’s belligerent and destructive lifespan comes to a close, there will be a world left for Thunberg’s generation to put back together. Unfortunately, I’m not old enough to be optimistic, so I don’t have any faith that liberals will wake up and smell the fire and brimstone in time to prevent this crisis. The only rational hope that’s left is that the youth can seize the reigns before it’s too late.