FRANCIS SHOR is a professor in the History Department at Wayne State University and author of Dying Empire: U.S. Imperialism and Global Resistance (New York: Routledge, 2010). He is a veteran activist and recently involved with Occupy Detroit.

“A Troll at the Bridge”: Trump, Trumpism, and White Identity Politics 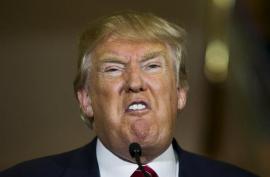 The rise and rule of Donald Trump embodies much that is disturbingly new from his almost daily narcissistic rants on Twitter to his overt racist, misogynist, and xenophobic public pronouncements.  On the other hand, there are historic roots to many of the positions articulated by Trump during his presidential campaign and adopted during his presidency.

The End of the “American Century”: Whither US Global Hegemony and the Indispensable Nation? 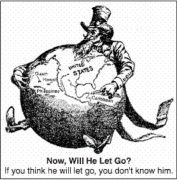 “This is the end, my only friend, the end/Of our elaborate plans, the end/Of everything that stands, the end/No safety or surprise, the end.” – Jim Morrison, The Doors

Will Donald Trump’s ascension to the imperial presidency mark the nadir of the declension of the United States as the global hegemon?  While Trump’s fantasies about “making America great again” do not explicitly rely on promoting the US as the “indispensable nation,” they, nonetheless, deploy strategies to resurrect the fossil fuel driven expansion of the military industrial state that marked the post-World War II period of US global dominance.  Does Trump’s criticism of NATO and “nation building” suggest a less interventionist foreign policy, or does his commitment to white nationalism still augur a redeemer nation, primed to contest those who would challenge US global hegemony? Given the present contradictions of US global hegemony and the policies and posturing of a Trump and his proposed Administration, are we witnessing the end of the American Century and its institutional and ideological commitment to the US as the “indispensable” nation?

As the shouts of “Black Lives Matter” reverberate from the streets of Ferguson, Missouri to the bridges of New York City, mass protest is once again raising the issue of the persistence of racism, both institutional and individual.  Young people, especially from within the black community, have assumed leadership by mo

U.S. Economic Imperialism and Resistance from the Global South: A Prelude to OWS

It is generally agreed that Occupy Wall Street (OWS) was a response to decades of economic inequality in the United States. However, to focus only on the national dynamics of U.S. capitalism is to neglect the global role of U.S. economic imperialism since the 1970s and the resistance that developed in the global South to specific instances of that economic imperialism. This paper will consider how imperialist policies promoted by U.S. sponsored agencies and activities engaged in by U.S. corporations’ elicited acts of resistance.