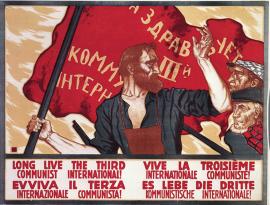 Book Review – John Riddell (editor and translator), To the Masses: Proceedings of the Third Congress of the Communist International, 1921 (Brill/Haymarket, 2016), £39.99.

To the Masses is the last volume of a hugely ambitious project to make the proceedings of the (four) congresses of the Communist International held during Lenin’s time available in English. It’s an extraordinary achievement for John Riddell, a Canadian revolutionary socialist historian and activist.