Mazzocchi and the Moment

In recent months I’ve been thinking a lot, more than usual, of Anthony Mazzocchi, longtime official of the Oil, Chemical, and Atomic Workers International Union, leading presence in the movement for occupational health and safety, and one of the very brightest lights of a serious working-class politics in the post-World War II era until his too-early death in 2002. Tony often observed, regarding capital’s revanchist attack on working people that has steadily intensified over the last four decades, that what we would now call the neoliberal Democrats had nothing to offer those who have been or fear being ground into the dust by the juggernaut. He cautioned that, if the left and the labor movement didn’t find ways to connect with that growing population of those hurting and to offer credible explanations of the sources of their condition and plausible strategies for fighting back, other, nasty and dangerous tendencies would. That perspective reflected a deeper view of politics that guided the thousands of us who, for nearly all the 1990s and most of the first decade of this century, struggled to articulate and advance an unambiguously working-class politics through the effort to build an independent Labor Party, of which Tony was the “Founding Brother” and animating force. In the 2015 issue of the Socialist Register, Mark Dudzic and I laid out an assessment of the state of the left and labor movement in the U.S. and the challenges that face us that is rooted in that perspective. 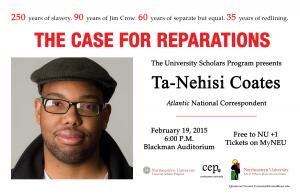 The following is a segment from Doug Henwood‘s Behind the News, January 21, 2016. Henwood is interviewing Adolph Reed. Audio link here.

DH: We’ve got Ta-Nehisi Coates citing the call for reparations and finding Sanders guilty of hostility towards reparations. What do you think of his critique?

AR: I read the thing in The Atlantic and it’s so utterly empty and beside the point, I can’t even characterize it.

Response to Jay and Sustar & Bean

The following article by Adolph Reed, Jr. responds to an article that appeared on the New Politics website a week ago. Sadly, since then we have learned that Karen Lewis has been afflicted with brain cancer. We offer our sympathy to her, her family, and her friends and wish for her rapid and full recovery.