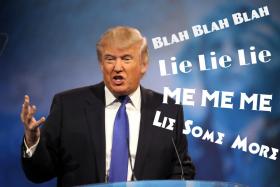 In the wake of the 2016 election, Oxford Dictionaries declared “post-truth” to be the 2016 international word of the year.[i] The viral spread of fake news stories (such as the infamous “Pizzagate”[ii] scandal alleging that Hillary Clinton’s campaign chair John Podesta secretly ran an illegal sex trafficking ring out of a Washington D.C. pizzeria) no doubt helped to install America’s lunatic POTUS and his clown car of white supremacist cabinet members into the Oval Office.