Presidential Candidate Bernie Sanders: Sheepdogging for Hillary and the Democrats in 2016 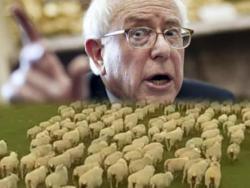 “The sheepdog is a card the Democratic Party plays every presidential primary season when there's no White House Democrat running for re-election.”

Spoiler alert: we have seen the Bernie Sanders show before, and we know exactly how it ends. Bernie has zero likelihood of winning the Democratic nomination for president over Hillary Clinton. Bernie will lose, Hillary will win. When Bernie folds his tent in the summer of 2016, the money, the hopes and prayers, the year of activist zeal that folks put behind Bernie Sanders' either vanishes into thin air, or directly benefits the Hillary Clinton campaign.

NOTE:  The original version of this article quoted a claim that no voter registration drive was conducted. Since we did not take the time to fact-check this claim before publication, the article has been altered to omit the claim. – Bruce A. Dixon

The results are in, and the truth hurts. Rahm Emanuel will sit in the mayor's office on the fifth floor of Chicago's City Hall four more years. Despite fudging police stats to make murders disappear, despite stonewalling on police torture and atrocities, despite deliberately shortening red light camera intervals to raise revenue for his buddies, despite closing and privatizing more than 50 public schools, almost exclusively in black and brown neighborhoods, than anywhere in the country, and despite his facing a solid progressive Democrat challenger, Rahm Emanuel carried every single ward in black Chicago, not by big margins, but by enough.