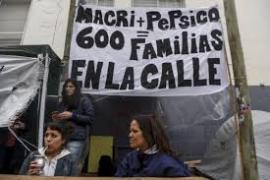 The story of the workers of a PepsiCo factory in Vicente Lopez, Buenos Aires, Argentina may be slightly confusing to those in America where it seems normal for a factory to close, as many did in the financial crash of 2008, without the workers organizing, despite losing valuable employment in a harsh economy. Yet the actions of the nearly 700 laid-off workers since PepsiCo, the second largest food and beverage corporation in the world, decided to move their production to another city south of Buenos Aires, could teach American workers a thing or two.