The End of Lulism and the Palace Coup in Brazil 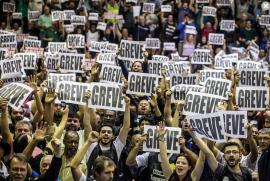 In general, analyses of Brazil’s current political and economic crisis emphasize the economic policy “errors” of the government, inherited by President Dilma Rousseff of the Workers’ Party (PT) from her predecessor, Luíz Inácio Lula da Silva. While it is true that certain federal policy decisions have interfered with the dynamics of the Brazilian distributive conflict, this focus on political regulation is far too narrow to illuminate the complexity of the current crisis. These explanations tend to obscure the changes in class structure that took place during the Lula era (2002-2010), and to overlook the impact of the international economic crisis. Indeed, such analyses fail to explain how the relationship between political regulation and economic accumulation not only failed to pacify class conflict but radicalized it.