Despite Protests, Guatemalan Elections Return the Military to Power 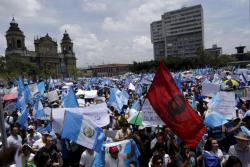 Karl Marx once wrote, quoting Hegel, that history repeats itself, but he added “first as tragedy, and then as farce.” And history has repeated itself in Guatemala following voting in the second round of the country’s 2015 presidential election. Despite protests against corruption, Jimmy Morales, a former comedian who is backed by the same military forces that backed disgraced ex-president Otto Pérez Molina, easily won the presidency by a wide margin following the second round of voting October 25.