A Mon Valley Memoir: Lessons From The Last Stand Of Steelworkers in Homestead 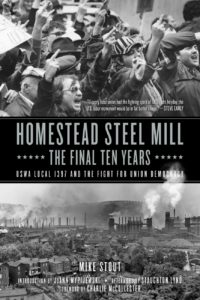 Many younger radicals today are trying to figure out how to relate, personally and collectively, to the labor movement.

Should they seek union staff jobs and become agents of workplace change that way? Or should they organize “on the shop-floor” itself— as a teacher, nurse, or UPS driver—and then seek elected, rather than appointed, union leadership roles? Members of the Democratic Socialists of America (DSA) discussed this latter strategy at DSA’s 2019 convention, narrowly passing a resolution in favor of it.

Other progressives, further down the rank-and-file road, are debating how they can hold union reformers accountable to the insurgent members who elected them. In some affiliates of the American Federation of Teachers and National Education Association, left-led reform caucuses have continued to function, even after they helped oust old guard officials and replace them with new leaders more committed to membership mobilization and strike activity.

Fifty years ago, campus and community radicals who came of age in the 1960s grappled with the same strategy questions during their initial challenges to the labor bureaucracy. Some had the foresight to transition into rank-and-file activism in the education, healthcare, and service sectors, where college backgrounds were useful and job security good.

Under the guidance of left-wing parties and sects, other student radicals got jobs in steel mills, auto plants or coal mines, at the phone company or in the trucking industry. Unfortunately, in the late 1970s and 1980s, de-regulation, de-industrialization, and global capitalist restructuring produced enormous job losses. Many who made a “turn toward industry” lost any blue-collar union foothold they had briefly been able to attain.

As we learn in Homestead Steel Mill—the Final Ten Years (PM Press, 2020), ex-steel worker Mike Stout journeyed down the same path but it didn’t become a personal or political dead end. The author transitioned from labor to community organizing and then operated a cooperative print shop for more than twenty-five years.

He remains an active Pittsburgh-area environmentalist and, as a singer-songwriter with eighteen albums, has often used his music to promote social and economic justice. In his lively new memoir, Stout argues that younger activists still have much to learn from past rank-and-file struggles in blue-collar industries even if they are now entering workplaces in “a neo-liberal world where technology, globalization, and deregulation have fundamentally changed and reduced our industrial and manufacturing base.”

Stout found his way to the shop floor at a time when few unions were adding known trouble-makers to their payroll. He dropped out of the University of Kentucky in 1968 and joined anti-war protests at the Democratic National Convention in Chicago later that year. He then become a singer-song-writer in Greenwich Village and a peace movement organizer. His brief “flirtation with a U.S. communist organization” turned out to be “short and sour,” but it did produce a solid job lead in western Pennsylvania.

In 1977, U.S. Steel was on a hiring spree at its massive Homestead Works, a hallowed labor history site ever since Andrew Carnegie deployed the Pinkertons to violently crush a strike there by the Amalgamated Association of Iron and Steel Workers in 1892. Ignoring Stout’s unusual (and probably sanitized) resume, the company made him a utility crane operator and dues payer in United Steel Workers Local 1397, already one of the most restive USW affiliates in the Monongahela Valley.

It was a decision that Homestead Works managers would later regret. Over the next decade, Stout helped turn his 7,000-member local into a key regional center for working-class resistance against the abuses of corporate power, by U.S. Steel and other firms. Through non-stop agitation, education and membership mobilization, Local 1397 also became a thorn in the side of top USW officials, located just a few miles away in the union’s national headquarters in downtown Pittsburgh.

As Stout’s memoir makes clear, the Homestead Works was not full of like-minded activists, all sharing the same high level of “working class consciousness.” His fellow “mill hunks” could be ornery, suspicious of outsiders, and, by contemporary standards, quite politically incorrect. Yet Stout was able to build lasting personal relationships with many of his co-workers that enabled him, over time, to earn their confidence, respect, and much-needed votes when he ran for union office.

The reform struggle in Local 1397 got a big boost, even before Stout was hired at Homestead, from Ed Sadlowski’s national campaign for the USW presidency in 1976-77. Based in Chicago, Sadlowski was the reform-minded leader of USW District 31, which then represented about one tenth of the union’s 1.4 million members. Only thirty-nine years old at the time, Sadlowski broke with his older, more conservative colleagues on the USW executive board because of their overly-cozy relationships with the steel industry.

Sadlowski’s Steel Workers Fightback platform called for greater union democracy, shop floor militancy, protection of black workers’ rights, and the right to strike. Stout recalls how Local 1397 dissidents favored much of this program—and wanted to rid themselves of local officials “who took our dues money, refused to file legitimate grievances, and were nothing but lackey yes-man for management.” After Sadlowski’s defeat in February, 1977, his Homestead supporters formed a “Rank-and-File Caucus” to win control over the USW’s third largest “basic steel” local.

According to Pittsburgh labor educator Charlie McCollester, their shop floor newsletter (which is well illustrated in Stout’s book) became “a powerful expression of workplace democracy.” With poetry, songs, satirical cartoons, and muck-raking news articles, the dissident rag “unleashed the intellectual and artistic side of those who got their hands dirty” working around the open hearths of Homestead.

Homestead reformers were led by Ronnie Weisen, an always combative former boxer. In 1979, they won a landslide victory over long-time incumbents, overcoming vicious red-baiting and other international union efforts to discredit them. Under Weisen’s colorful but volatile leadership, the Homestead local became “a fighting organization on behalf of the members,” with much help from Stout.

Local 1397’s more combative stance took multiple forms. Inside the mill, Stout reports, “workers demonstrated a hundred different ways you could oppose unsafe working conditions and unjust management treatment on the shop floor, with or without a grievance procedure.” In the past, Local 1397 officials had not been aggressive enforcers of the contract. In fact, when “workers filed hundreds of grievances and complaints, mainly about local working conditions and discipline, most grievances would make it to the third step…and then just disappear.”

After Stout became an elected “griever,” that quickly changed, thanks in no small part to work by members themselves. Much to the chagrin of Homestead supervisors, rank-and-filers were welcomed into labor-management meetings for the first time. They played an active role in gathering evidence necessary to win grievance and arbitration cases—and they were empowered to argue these cases on their own behalf. More than anything else, Stout’s creative use of the grievance system restored confidence in the union and produced concrete results, in the form of back pay and other financial settlements worth hundreds of thousands of dollars.

But such militancy from below could only go so far. Just as 1397 was flexing its new union muscles, U.S. Steel’s corporate re-structuring and downsizing put enormous pressure on USW headquarters to save jobs by making industry-wide contract concessions. In contrast, Local 1397  leaders felt that job cuts and give-backs could only be countered by building new community-labor alliances away from the shop-floor.

Steelworkers from Homestead helped form the Tri-State Conference on Steel, an “ecumenical coalition” that spawned the Mon Valley Unemployed Committee, which provided direct aid to displaced workers. They also backed the Steel Valley Authority (SVA), which tried to get municipalities, in Ohio and Pennsylvania, to use their power of eminent domain to arrest capital flight and maintain local manufacturing under public ownership.

The ensuing campaign utilized not only litigation, but also militant protests, press conferences, grassroots fund-raising, bank boycotts, and political action, which included Stout’s own nearly successful run for the state legislature. But it was no easy task trying to work effectively with a sprawling and often contentious network of community leaders, state and local elected officials, sympathetic academics, clergy members and laid off workers.

In the end, Stout and his comrades were up against external forces too powerful to overcome. Nearly a century after Andrew Carnegie broke the original craft union at Homestead, the same mill closed for good, putting its industrial union successor out of business. “In the Mon Valley alone,” Stout writes, “over 27,000 U.S. Steel employees lost their jobs.” While the company was scaling down at home, it ramped up steel production abroad. It also shifted investment into oil extraction and real estate.

Mill modernization under “worker-community ownership” would only have become more economically viable, as an alternative, with large scale federal funding, as part of a comprehensive national industrial policy.  As Youngstown labor lawyer Staughton Lynd notes in his Afterword to Homestead Steel Mill, this was definitely not part of President Jimmy Carter’s agenda. It was even less likely to happen after Carter was defeated by conservative Republican Ronald Reagan in 1980, with the help of votes from more than a few disillusioned USW members.

Instead, Mon Valley towns like Homestead got decimated, and many steel worker families were uprooted or impoverished.  According to Charlie McCollester, this experience of “collective suffering and governmental failure engendered a deep working-class bitterness that haunts our politics to this day,” particularly during a 2020 presidential election in which the “rust belt” remains contested terrain.

Stout concludes his memoir with an important message for younger activists about the need to “radically restructure unions to meet the challenges of today.” He warns that, “without democracy and the direct day to day involvement of their members, unions will not survive the current right-wing, corporate onslaught that aims to dismantle and destroy them.”

The dynamics of late-twentieth century capitalism may have rendered the project of labor radicals like Mike Stout impossible at the time, but their socialist vision remains highly relevant to modern-day efforts to re-build working class power. Hopefully, readers of Stout’s book who have picked up that torch will be able to write a happier ending to their own generation’s labor organizing story.

Posted May 18, 2020 Labor by Emma Wilde Botta
About Author
STEVE EARLY is a labor journalist, lawyer, organizer, or union representative active since since 1972. For 27 years, Early was a Boston-based staff member of the Communications Workers of America. He finished his CWA career in 2007, after serving as administrative assistant to the vice-president of CWA District 1, which represents more than 160,000 workers in New York, New England, and New Jersey.

One comment on “A Mon Valley Memoir: Lessons From The Last Stand Of Steelworkers in Homestead”