A Socialist Campaign in Ohio The Dan La Botz Socialist for Senate Campaign in Ohio in 2010 was one of the most successful socialist electoral campaigns in more than 60 years. The 25,000 votes cast for La Botz compare favorably with earlier Socialist Party candidacies in Ohio, with other socialist parties, and with reformist parties to the left of the Democrats. The La Botz campaign, in fact, compares favorably with all Socialist, Communist and Socialist Workers Party and other leftist party campaigns since the heyday of socialism. Only Eugene V.

Remembrance of Politics Past

If the purpose of a memoir is to tell the story of a life or the evolution of an individual’s thinking, this one by Christopher Hitchens, the jowly, balding erstwhile enfant terrible doesn’t ring true. There’s no metamorphosis in thinking here — it’s more a whipsawing of opinion if not a trading up. And despite a heavy lathering of opinions, there’s precious little of his adult life as lived.

The Crime of Poverty Loïc Wacquant has expanded the theory of the neoliberal state beyond the usual economic definition. He has linked the criminal justice system with the welfare system as two parts of the same policy of enforcing conformity to an unstable job market of temporary, part-time, low-paid, and flexible employment. Other criminal justice scholars and welfare scholars have analyzed these as separate spheres. While they have seen both as repressive, they have not seen them as interconnected.

The Popular Front, A Social and Political Tragedy: The Case of France Decades since the spring of 1934 when the Communists first proposed the Popular Front as their strategy for fighting fascism and even longer since the summer of 1939 when it was suddenly terminated by the Hitler-Stalin Pact, the Popular Front—the alliance of the Communists with Socialists, liberals, and even sometimes conservative political parties—remains an issue for the left. Public Sector Workers and the Crisis Workers are in no way responsible for the economic crisis of capitalism. This would be or at least should seem to be obvious to socialists. Noncontroversial as it may now be, this has not always been the case. There have been socialists — quite outspoken in their time — who had attributed past turndowns to a profit-squeeze triggered by cumulative decades of militant wage demands. 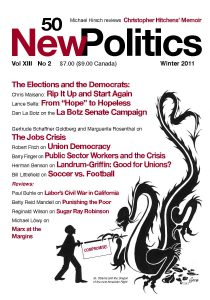 From “Hope” to Hopeless: The Democrats’ Debacle, Lance Selfa

Rip It Up and Start Again, Chris Maisano