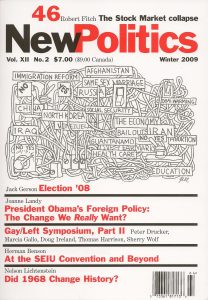 In Defense of Washington and Wall Street

1. The Crisis of 2007-2008
THE VERY ELDERLY ARE PRONE TO FALL. And unlike infants who also tumble frequently, each time seniors stumble, they risk a disabling or even a fatal injury. On August 9th 2007, after an unparalleled quarter century long expansion, which had been checked in the developed countries only mildly and briefly, capitalism finally tripped and lost its balance with predictable results: banks tottered, while credit and commercial paper markets writhed in paralysis.

MICHAEL HIRSCH’S CRITIQUE misleads, or outrightly distorts, many of the points we made in our review.*

LEON TROTSKY’S TRANSITIONAL PROGRAM begins with words that have made the left nuts ever since. “The world political situation as a whole is chiefly characterized by a historical crisis of the leadership of the proletariat,” the old exiled Bolshevik and Red Army founder wrote.That analysis was arguable in 1938, when it was written, less so in the 1960s, when the United Federation of Teachers was formed. Would that it were remotely plausible today.

IN 1865, WHILE MARX, IN HOLLAND, was playing the Victorian parlor game “Confessions” with his daughter Jenny, when asked for his favorite maxim he replied, “Nihil humani a me alienum puto” or “nothing human is alien to me,” a dictum he had lifted from the second century B.C. Carthaginian slave-turned-playwright Terentius (Terence.)

REAL UTOPIA IS A WIDE-RANGING BOOK that can deliver for the open-minded reader. It relates ideas and actions that develop naturally out of commonly held values, but that can still bring surprise, the shock of revelation, the rearrangement of familiar territory, and a different framework for us to see ourselves within. Who is the “us”? People who subscribe to the cry of the World Social Forum: “Another World Is Possible!” The questions many of us urgently want answers to are: What is this “other world”? What does it look like?

Symposium on Gays and the Left (Part II)

IN THE LAST ISSUE OF NEW POLITICS, we published Part I of a symposium on gays and the left, with contributions by Bettina Aptheker, John D’Emilio, Martin Duberman, Jeffrey Escoffier, and David McReynolds, and a piece by Christopher Phelps on a 1952 document of the Socialist Party youth that urged the SP to support the decriminalization of same-sex activity. Below is Part II of the symposium, with articles by Peter Drucker, Marcia Gallo, Thomas Harrison, Doug Ireland, and Sherry Wolf. We invite responses from our readers.

IN 1996, THE ACADEMIC JOURNAL Social Text, self-described as “a daring and controversial leader in the field of cultural studies,” published an article by physicist Alan Sokal in which Sokal argued that in quantum gravity, “the foundational conceptual categories of prior science — among them, existence itself — become problematized and relativized.” What did Sokal mean by this? In Sokal’s own words, “This . . .