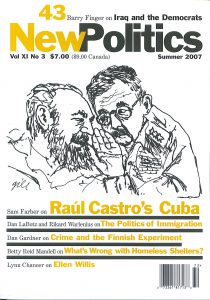 END_OF_DOCUMENT_TOKEN_TO_BE_REPLACED

HOW HAVE MARXIST THEORISTS and activists, Socialist parties and Communist States understood Anti-Semitism? How did they confront the rise of fascism in Germany? Spanning the period between The Communist Manifesto and the fall of the Berlin Wall, German historian Mario Kessler’s On Anti-Semitism and Socialism examines the relationship to Jews, and to anti-Semitism, of Karl Marx, Friedrich Engels, Leon Trotsky, other individual Marxists, and various political parties in Germany and the Soviet Union. THERE IS A CONSENSUS among democratic socialists today that the struggle for deep social change has to somehow reflect the kind of society we want to build, but this remains inseparable from the questions of power, political strength and effectiveness because prefiguration goes beyond the "pure" ethical sphere to include wider issues of ideological/cultural, political and socio-economic hegemony. The revolutionary syndicalist answer to the problem of integral prefiguration represents a specific and important historical (and contemporary) synthesis.

NEAR THE BEGINNING of Voltaire's satirical classic Candide, the protagonist is told by his learned mentor Dr. Pangloss that he lives in the best of all possible worlds. No sooner has Candide absorbed this nugget of life-defining wisdom than he is booted out of the manor in which he has been living, conscripted into an army, and exposed to the clarifying rigors of a gore-filled modern battlefield.

Finland Is Soft on Crime

AS PRESSURE GROWS in Canada to adopt the American justice model of harsh prisons and long sentences, Finland has saved millions and prevented centuries of human misery doing the opposite. HAMEENLINNA, Finland — In a classroom thick with wigs, sinks and barber chairs, a man sprays water through a woman's sudsy hair and works his fingers carefully to rinse the shampoo. Standing in front of a large mirror, another man brushes and sprays a woman's hair. Two others discuss styling techniques. It could be a scene from any community college, but for the bars on the windows.

HOW WOULD YOU LIKE SOMEONE to say to you, "Come with me into the bathroom? I want to watch you pee into this paper cup to see if you have been taking drugs." That is what is happening in some shelters for homeless families in Massachusetts. Steve Valero, a lawyer at Greater Boston Legal Services, is indignant about this and has been telling shelters that it is an illegal practice. Some shelter directors claim they had no idea it was illegal. They thought it would be better to have all residents tested for drugs rather than singling out one person.

The Immigrant Rights Movement: Between Political Realism and Social Idealism

MILLIONS OF IMMIGRANTS took to the streets between March and May of 2006 in Los Angeles, New York, Chicago and dozens of other U.S. cities in the largest social and political demonstrations in American history. As the immigrants left work or school to join the marches, in some areas the protests, dominated by Latino workers, had the effect of a general strike, shutting down local businesses and blocking traffic in the centers of major cities.