The Student Uprising That Ushered In the Radical Sixties: The Berkeley Free Speech Movement 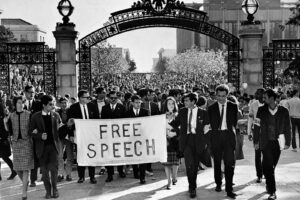 The current mass upheaval has reached a scale not seen in this country since the 1960s. So it is timely that Haymarket Books has republished an account of a key revolt in that fabled decade – the 1964 Free Speech Movement at the University of California at Berkeley.

A Debate about Iran and the Left

The Campaign for Peace and Democracy’s “Q&A on Iran” has elicited an extremely critical response from Edward Herman and David Peterson, posted on MRzine. To summarize, Herman and Peterson accuse the Campaign of aiding and abetting (unwittingly, they allow) U.S. imperialism and its aggressive designs on Iran. They reject, for the most part, allegations of election fraud by the Ahmadinejad regime and dismiss the idea of solidarity with the Iranian pro-democracy movement. Their position appears to be that the U.S.