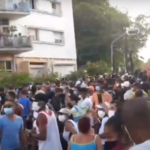 Presentation for an August 11, 2021 panel on “What’s Happening in Cuba?” organized by Internationalism from Below, New Politics, and Haymarket Books. Other participants were Odette Casamayor-Cisneros and Samuel Farber. Natalia Tylim moderated. The full panel can be seen here.

I thank New Politics and the other organizers for this event for the invitation to this debate space. First, because the subject is important, I would say crucial; second, because the opportunity to publicly debate the current situation in Cuba is encouraging, as it is something difficult for Cuban intellectuals within our own country; and third, because it is an honor to share with people like Odette Casamayor and Samuel Farber.

The subject to be debated is what happened in Cuba on July 11. According to the Cuban government, as stated on July 19 by Juan Antonio Quintanilla Román, Cuba’s permanent representative in Geneva:

“In Cuba there was no social outbreak on Sunday, July 11; there were riots, disorders on a very limited scale, caused by a communicational operation that had been prepared for a long time from outside the country.”

This perspective is totally wrong. I will substantiate my statement.

In 2021, it will be 35 years since Fidel announced the start of the “Process for Rectification of Errors and Negative Trends”. It also marks 14 years since Raúl [Castro] set down the reform process known as “Updating of the Cuban Economy”. In neither case were successes achieved.

In those three and a half decades, an enormous amount of social debts accumulated. Poverty and vulnerability of broad sectors increased, as is evident in certain municipalities, zones and neighborhoods. These sectors include the elderly, retired or pensioners; single mothers who, due to divorce or emigration of their partners, had to take on raising their children alone; black people and those who are not employed in the tourism sector.

People in Cuba have not suffered the hard years and poverty all in the same way. They do not belong to the same generations, and don’t have the same levels of trust, patience, capacity to resist, or political commitment. And the monopoly over information and citizen campaigns no longer exists.

Especially since the arrival of Raúl Castro to the government—although it started earlier—a substantial part of the national economic patrimony has been withdrawn from popular control and placed under the aegis of the Grupo de Administración Empresarial SA (GAESA), a company attached to the Ministry of the Revolutionary Armed Forces (FAR). This sector has attracted most of the investments to the detriment of others, such as agriculture, industry, science, health and education, to name just key examples.

Usually, a social outbreak has catalytic elements. In this sense, the Cuban government blames the Trump administration’s pressure measures on Cuba, maintained for the most part by President Biden, and the conditions of tensions derived from the pandemic. It is true that this aggravated the situation on the island. However, the weight of two decisions recently taken has not been mentioned as internal catalysts for the protests:

1) The so-called “Ordering Task”, a general reform of prices and wages that began in January, without having been accompanied by corresponding previous structural and legislative changes to strengthen the domestic private sector or even the public sector itself. The government denies that it was shock therapy, but the wage increase, in the midst of the current crisis and scarcities, triggered a spike in the prices of products and services to incredible levels, absorbing in a short time real wages and depressing them again.

2) Social inequalities have increased due to the controversial decision to open commercial establishments that would only sell in dollars deposited on magnetic cards.

On July 11, thousands of people, with great diversity in all senses, took to the streets of nearly fifty towns and cities. From an ideological point of view there were those who want a truly democratic, inclusive and participatory socialism; those who would like a restoration of national capitalism; and even those who did not have clarity in their political ideas but demanded immediate changes to their precarious living conditions.

Regarding representation by age, there was a large presence of young people, including teenagers, but also elderly people of different ages. There were university students, workers, professionals, workers, the unemployed, artists, intellectuals.

No political leadership was seen in the protests, neither from individuals nor from organizations. They had a disorganized character, even anarchic if you will, like all spontaneous outbursts. They were mostly peaceful, although there were acts of vandalism and violence.

Social networks helped increase convening power. This was not exclusive to Cuba, and we have seen it in protests in other countries, such as France with the Yellow Vests, and in Chile recently. The thesis that in Cuba a “soft coup” against socialism is being attempted hides reality.

I fully understand that social networks lend themselves to open calls, and that behind them there are hegemonic interests of regime change. However, reducing everything that happens on the island to a conspiracy theory seems very simplistic and self-justifying.

Neither does the Cuban government recognize the police violence, exercised against the spirit of the Constitution, towards the detained protesters, who in many cases suffered physical and psychological abuse. Several of them were unaccounted for for several days by their families. This must be investigated and clarified with transparency.

In the La Joven Cuba analysis portal, of which I am the coordinator, we have already published Leonardo Romero’s testimony, and today we published about  the hard-hitting experience of Alexander Hall, a young university student in history and Afro-descendant activist with socialist ideas.

My opinion is that we are witnessing the definitive exhaustion of a political model, the model of bureaucratic socialism. Our rulers are unable to make the nation progress with the old methods, but they are not capable of accepting more participatory forms with a greater weight of citizens in decision-making. The National Assembly of Popular Power (ANPP), our Parliament, has been filled with representatives of the Party and governmental bureaucracy: members of the Political Bureau, the Central Committee, provincial and municipal political officials; ministers, vice ministers, governors, mayors; directors of companies. Meanwhile, the deputies from the popular bases have been decreasing in number.

This determines the political character of the protests, since the pressure of the majorities from below is what has made political systems evolve from ancient times to today.

In the one-party bureaucratic socialism model, the real and spontaneous participation of citizens in political activity is not allowed. This discriminatory condition is what explains why, in the face of the social outbreak of July 11, the Party reacted in a police and non-political manner.

Anti-imperialist forces in the face of J-11

The social outbreak of J-11, unprecedented in the history of the socialist process in Cuba, has shaken the international left, which is perfectly understandable. However, a question arises: Is it possible to reject the U.S. government’s blockade of Cuba and at the same time criticize the Cuban government’s attitude to these events?

The answer is yes. First of all, it must be clear that the geopolitical relationship of the United States towards Cuba has been profoundly imperialist since before 1959. They became involved in the Spanish-Cuban War, they did not allow the government of Cuba in arms to be present at the signing of the Paris Peace Treaty. They remained as occupation troops and only withdrew when an appendix, the Platt Amendment, was added to the 1901 independent republican Cuban Constitution authorizing them to intervene if they considered their interests undermined.

The United States never broke relations with Cuba during the dictatorships of Machado and Batista, despite the flagrant violation of the rights of Cuban men and women. It is known that hostility towards the island was enhanced by the triumph of a revolution that, before declaring itself socialist, was profoundly anti-imperialist and nationalized properties in the hands of North American companies.

The blockade, aggravated by the two laws that assume an extraterritorial position, affects the commercial and financial relations of the Cuban government and assists in the aggravation of the island economy. It is a challenge to international law and the sovereignty of a neighboring state.

For all this, it must be rejected; but also because as a geopolitical strategy it has proven to be ineffective. From the human point of view, the blockade affects the people of Cuba and not directly the bureaucratic class that runs the country, to which one must add that it has served as a justification for many erroneous internal policies and decisions.

Opposing the imperialist desires of the United States in Cuba is an ethical imperative, of law, that should not be weakened one bit by the events of J-11. On the contrary, the opposition to the blockade must be strengthened. But supporting the Cuban government uncritically is not acceptable either.

Many leftist militants may believe that by criticizing the Cuban government, they are playing the game of the US government because they question a socialist country. It is not like this. The bureaucratic model in Cuba has weakened socialism by refusing reform and by closing itself off from citizen participation.

In Cuba, freedoms are restricted to those who think differently with respect to the government and dare to say so. People who wish to exercise their right to think and express themselves are subjected to violence, whether they are socialists or not. Students and teachers, some with socialist ideas, have been expelled from the universities for ideological reasons. Many people are detained at their homes without charges, they are prevented from moving through the streets, with state security agents who threaten them and can detain them without there being a legal warrant that allows it.

Some may think that the socialist state defends itself in this way against external hostility; however, socialism in Cuba, as the political horizon of the State, has been increasingly weakened.

A socialist system that cannot be influenced from below is an entelechy [‘an empty shell’], and ours is trapped in a flagrant contradiction: we have approved a Constitution that is not viable because part of it sustains the situation of violation of freedoms—specifically, Article 5, which declares the superiority of the single Party—while another part recognizes such rights and freedoms as parts of a “Socialist Rule of Law”.

The Cuban people need profound economic, political and social changes. These must be internal, without any external pressure or interference by the United States. To this end, international anti-imperialist militants must press for the elimination of the blockade, which in the end is an imperialist policy, and at the same time, take up solidarity with the Cuban people in the fight for their rights.