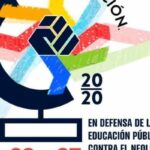 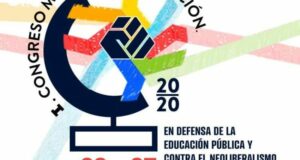 The following invitation to participate in the First World Congress in Defense of Public Education and Against Educational Neoliberalism was written by a broad coalition of educators in Latin America and Europe. Educators from all over the world are encouraged to register and take part. For more information about how to take part, email: congresomundialdeeducacion2020@gmail.com. First published in Spanish by Otras Voces en Educacíon, translated by No Borders News.

The COVID-19 pandemic has generated an unprecedented global paralysis and exposed the deep inequalities of the neoliberal system. Big capital is using this crisis to deepen exclusion and domination in its own interest. Waves of privatizations of basic services and social rights over the last few decades mean that the pandemic has hit the impoverished and the working class the hardest.

The paralysis on all levels generated by the pandemic has been intertwined with an economic crisis of capital that is expressing itself in a new global economic recession. In this context, we see the emergence of neo-conservative governments with fascist policies (for instance, Trump or Bolsonaro) who, by their denialist policies with respect to COVID-19’s health risks, have sent thousands of human beings to the hospital or to their deaths. Many governments, following the examples of Trump and Bolsonaro, have privileged profits over human life. This must be challenged by the world’s peoples and their social movement organizations and trade unions at the level of ideas, mobilization, and organization.

The current situation is one of deep global capitalist crisis, a crisis that places the costs of this situation on workers’ shoulders. The COVID-19 pandemic has served as a pretext to advance the neoliberal agenda in the field of public education, concretized by new forms of educational privatization, associated with the lack of access to the internet and the necessary equipment for participating in virtual classes.

The experiment of remote learning is being used to settle a conflict that hardly existed in February 2020, a controversy between face-to-face education at school versus virtual education at home. The capitalist system cannot rapidly stifle public schools with impunity, but it is creating a social imaginary that suggests that schools are obsolete. This initiative seeks to open up digital educational content to technology corporations and to the “educational market,” and it is accompanied by a sustained disinvestment in teacher training for digital contexts such as the current one.

Despite this, the international teaching profession has assumed, on its own account and with the support of its unions, the task of preparing itself to face the current pedagogical challenges. The educators of the world have proven themselves worthy proponents of the right to education, even under increasingly adverse conditions. They have safeguarded the maintenance of pedagogical bonds with their students.

But educators’ efforts cannot hide the emergence of new forms of privatization, those transferring the responsibilities of the world’s nation states to guarantee the minimum conditions for the education of a new generation onto our families, teachers, and students. It is now families, teachers, and students who must purchase or upgrade computers, pay for data plans for internet access, and even acquire private platforms to be able to teach or receive virtual classes. This privatization is hidden behind a thick governmental public relations smokescreen that speaks of the supposed educational successes achieved during the pandemic, with opportunistic phrases about teachers’ heroic mystique.

Teachers have been overworked, stuck in their homes, left on their own to continue their students’ educational progress. This has been accomplished by the world’s teachers with little or no recognition from governments.

In just months, millions of students across the world have been expelled from educational systems. Virtual, hybrid, and multimodal education proposals have left millions of students with no real possibility for continuing their studies. It is not young people who are leaving their studies, it is the capitalist system that is abandoning them, by disrupting schools’ role in creating greater equity.

Some governments have irresponsibly called for a return to classes in the midst of rising infections, without a vaccine and without adequate health precautions, actions that clearly demonstrate that their greatest concerns lie in reactivating the capitalist economy, by putting the lives of children and education workers at risk.

While capitalism today supports public schools as institutions to provide childcare and a place to transmit functional knowledge useful for the current mode of production, we defend schools as centers for critical thought, solidarity, human interaction, and a site for social transformation.

The current crisis confirms old certainties while raising new challenges. For one, the certainty that education must be a face-to-face – so reviled by the neoliberal educational commodification – has reasserted its value for the practice of teaching. Having said this, the return to school and in-person learning must not be simply a naturalized return to the reality of inequalities that existed long before March 2020, inequalities that were dramatically highlighted during the pandemic.

The challenge facing our generation of education workers is even greater: we must imagine and then construct responses that move beyond today’s crisis, responses capable of connecting the current resistance to a strategic horizon. This challenge flows from the need to develop pedagogical alternatives that can support new concepts of school.

Taking on this challenge in the most consistent and responsible way implies going beyond national borders since what is at stake is precisely the overcoming of a crisis of globalized neoliberal education.

Public universities have been pushed by capital towards models of privatization, a fact which demands a renewed commitment to their public character, a necessity that we must make central to our concerns.

With this purpose in mind, and with the recognition, solidarity, and trust of those who are fighting in defense of public education, we have been building an international meeting space, one that is open, horizontal, plural, and inclusive. We call it the International Contact Group (GCI), its aim is to continue thinking about these and other educational challenges in a collaborative process.

The International Contact Group has promoted debates, reflections, and analyses, regarding the characteristics of the current capitalist offensive against education during these five months of pandemic and we have decided there is an urgent need to convene a First World Congress in Defense of the Public Education and Against Educational Neoliberalism.

The First World Education Congress 2020, which will be held online, raises the challenge of facing neoliberalism in all its forms; therefore, we will works towards the establishment of an International Coordinating Committee of Education Workers (CITE). This committee will form a permanent space for dialogue, gatherings, and organization for those fighting in defense of public education and against educational neoliberalism. We invite all organizations, unions, social movements, and individuals who share these ideas to join in the debates and deliberations on September 26 and 27, 2020.

Reposted from No Border News.