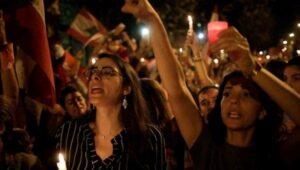 Women at an anti-government protest in Beirut, November 2019

It has been known since the early days that women’s emancipation starts with achieving financial independence, and women nowadays work hard for this. In Eastern societies like Lebanon where patriarchal values still persist, women find it even more essential that they find jobs that could give them financial independence, but this need in most cases consumes the woman’s identity, making her even more aware of the reality of her sexist environment which is constantly undermining her. The idea of working as means of independence existed before capitalism, but the free market regime has turned this liberating experience into a nightmare, especially for women.

The phenomenon of unemployment is no stranger to Lebanon, in fact, it is one of the country’s core problems that is in constant increase. The last study on employment conducted in 2018-2019 by Lebanon’s Central Administration of Statistics (CAS) in partnership with the International Labour Organisation found that the general unemployment rate is 11.4% with youth unemployment being 23.3% (http://www.cas.gov.lb/index.php/economic-statistics-en/90-english/key-indicators-en/key-indicators-infoslider-en/110-unemployment-rate-en). In early 2019, the previous minister of Labour, Mohammad Kabbara, announced that the rate for youth under 25 reached 37%. (https://en.annahar.com/article/1004952-unemployment-the-paralysis-of-lebanese-youth)

However, this official number is much lower than the rate right now during the corona pandemic and the country’s dollar and economic crisis. Without any particular crisis, women are usually discriminated against in the job market with regards to pay, choice for employment, and attitudes in the workplace. As a matter of fact, Lebanon is ranked at the moment in the 145th place out of 153 countries on the World Economic Forum Global Gender Gap Index 2020, meaning it is the 9th worse country concerning the gender wage gap. Can you imagine how worse the situation for women is right now?

One way to assert themselves as strong, non-submissive women is to work, but ironically, under today’s capitalist standards, work has become another form of enslavement, especially so for women. Not only would corporations rather hire males because of the patriarchal mindset of men being “more qualified”, but also in their biology, women pose a threat to the business in general because every woman is a potential child-bearer and child-rearer. All kinds of care work fall on women in our society – caring for their children, husbands, household, and parents in their old age.

According to the labor law in Lebanon, women are prohibited from working in areas that are considered “hard or hazardous” for women such as mining, welding and metalwork, glass work, slaughterhouses, and the like. Males put laws which reflect their own truth and view, and this is problematic, especially when we look back at the women in Soviet Russia who demonstrated their capability of providing the labor force needed during the war in typically masculine areas of work like railways, mining, metallurgy, and timber rafting, alongside taking on military roles. The greatest victory patriarchy could ever achieve is making women believe in the limitations it set for them.

With regards to maternity leave in Lebanon, women are granted a paid leave for ten weeks only, and employers can and have put pressure on pregnant women to submit their resignation or to appoint a replacement during their leave. What is more is that paternity leave is not enforced in the country and that’s mainly because of the traditional gender role that assigns women all caretaking tasks, while scoffing at the idea of husbands/fathers sharing the burden with their female partners; it is viewed as “emasculating” for the macho heterosexual male.

People have learnt to accept such injustices that result from capitalist systems, considering it as the only way to live, thus succumbing to it. But they immediately counter any mention of socialism with the card of Stalinist horrors and gulags. But let’s consider some socialist practices that were proposed by influential female figures like Lily Braun and Alexandra Kollontai; Poland had already granted its female employers 12 weeks of fully paid maternity leave by 1924; in Czechoslovakia, women had eighteen weeks of paid maternity leave plus a job protection as decreed by the Labor Code by the year 1956. In 1973, Bulgarian women were granted 120 days of fully paid maternity leave before and after the first child’s birth, in addition to six more months of paid leave at the national minimum wage; fathers were also educated on the importance of their contribution to the household and were decreed paternity leaves. The list goes on.

One can also get a more direct comparison by looking at the quality of lives led by Eastern German women in contrast to their Western counterparts. In the German Democratic Republic,  the state fully supported women when they entered the labor force; single mothers and fatherless children were taken care of and not marginalized like today. All basic needs were provided by the government and women invested in their educational and professional lives even as mothers. There were centers for children of female students on campuses. On the other hand, women in the Federal Republic of Germany where capitalist practices were applied, went back to their traditional gender role of housewives after the end of WWII; they took care of the children, stayed in the kitchen, and went to church. In fact, women were not allowed by law to seek a job other than their housework without the consent of their husbands until 1957. The lack of support to manage the dual responsibility of childcare and work hindered West German women from getting full-time jobs, so married women often settled for part-time jobs with a huge gender wage gap, bigger than that in Eastern Germany.

In our Arab eastern societies, it is usually the mother who gives up her dreams and ambitions to be a full-time housewife, while the father remains invested in his professional and social life. It is always women who are pushed to make a choice between striving in their own personal and professional lives, or their identities as mothers and wives. Women should be able to be both because they can, and they have in the past because they were in a nourishing environment that enabled them.

The premise of work for women who seek independence can be more than just means to get money. Most importantly, it frees women from the captive inferior position in her relationship with males since she doesn’t need their money to survive. It becomes about personal growth, feeling of accomplishment, purpose, but sadly reality is very different, and in many cases, women have to endure horrible circumstances to afford basic needs. The current money-hungry system with straight males at the top of the food chain will never care about the suffering of women, and even more so of women of color who have to work “less prestigious” jobs like domestic workers who mostly toil under harsh and exploitative conditions with no actual protection.

Following the example of Emmeline Pankhurst and her likes who formed the Women’s Social and Political Union in the UK that fought for women’s political rights courageously, women in our society should unite themselves in unions that welcome women of all backgrounds and nationalities to fight for their social, economic, and political rights. In addition to our fight being one of class, we should not forget that it is also one of gender because we are not only economic nor solely political forces, we are primarily human beings with a wide array of rights to obtain.