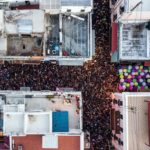 For 14 days this summer, Puerto Ricans engaged in nightly protests that resulted in the ousting of Governor Ricardo Rosselló. The protests—which amassed nearly one-third of the archipelago’s population—were sparked by a leaked chat in which the governor and members of his cabinet exchanged misogynistic, homophobic, and classist messages, including threats against political opponents.

The event, now dubbed “RickyLeaks,” also revealed how the government manipulated media messaging to create a positive image of the administration and gain support for its efforts in privatizing the public sector. Perhaps most stunningly, the chat included jokes made by officials in regards to the 4,645 deaths that resulted from Hurricane Maria.

However, the leaks were not the main reason people took to the streets in protest. They only revealed what most Puerto Ricans already suspected of their government: that it was engaged in deep-rooted corruption and led by people who did not heed the voices of ordinary Puerto Ricans. The leaks were the catalyst that compelled people to act, but the groundwork for the success of the resistance movement in Puerto Rico was laid well before people first took to the streets of San Juan.

Puerto Ricans had many reasons to protest. In the last two years alone, austerity measures enacted under the U.S.-imposed Fiscal Control Board have resulted in the closure of more than 400 public schools, the privatization of the archipelago’s electrical company, and a severely slashed budget for the University of Puerto Rico. Such harsh austerity measures have led to a forced migration of Puerto Ricans to the U.S. mainland, weakening the communities they leave behind. The inefficient response to Hurricane Maria shook Puerto Rican confidence in its government.

All of this, combined with generations of corruption—Ricardo Rosselló’s father was a former governor in the late 1990s, and is known to have systemized corruption in the government—contributed to a growing rage that overflowed into the streets this summer when the insult became too much to bare.

Civil resistance movements like the one taking place today are not new to Puerto Rico. In the 1930s, sugar workers led by Pedro Albizu Campus went on strike, paralyzing Puerto Rico’s economy and severely impacting the profits of U.S. absentee landowners. In 1998, more than 6,000 workers at the Puerto Rican Telephone Company called for a general strike, and thousands took to the streets to protest the privatization of the telephone company under Rossello’s father. A year later, coordinated acts of resistance against the U.S. Navy’s bombing range in Vieques (an island municipality in the west of Puerto Rico) gained the support of a diverse sector of Puerto Rican society. Activists set up camp on the bombing range, effectively halting military exercises for more than a year, and some 150,000 people flooded the streets of San Juan in the largest protest the archipelago had ever seen.

The unprecedented protests that erupted in San Juan on July 22, 2019 have since solidified their place as the largest act of civil resistance in Puerto Rico’s history, with an estimated 1 million people (about 30% of the population) participating. Just as in Vieques, the unity shown in the recent protest marks a unique moment in Puerto Rican history. The events of recent weeks emerged organically with no clear leadership structure. Javier Smith Torres, a long-time activist who was arrested during the protests, said that “the people were self-mobilized through social media,” and that they were galvanized by their frustrations toward the government in the wake of Hurricane Maria. “After Hurricane Maria there was no government, and those who took responsibility for the communities were the people.”

However, the role of long-established groups such as Colectiva Feminista en Construction (Feminist Collective in Construction),  Jornada: Se Acabaron las Promesas (Jornada: The Promises are Over), LGTTBQ organizations, the university student movement, and various sectors of the Puerto Rican independence movement, cannot be understated. For years, these groups have been at the forefront of denunciations against corruption, misogynistic leaders, and the Fiscal Control Board.

The Activists: Who They Are, What They Want, and How They Protest

Calls for the governor’s resignation came from all sectors of society: religious groups, artists, singers, politicians, banks, the construction sector, fishermen, teachers, students, and one police union (COPS), among others. Young people’s participation in the protest was significant. The unity that emerged during the 14-day protest circumvented political parties and status ideologies. The slogan, “Somos Más y No Tenemos Miedo” (“We Are More and We Are Not Afraid”), was repeatedly used in the streets that led to the governor’s residence, La Fortaleza, to demonstrate protesters’ unity and fearlessness. The diversity and creativity of tactics that emerged throughout the protests were an expression of Puerto Rican heritage. Horse caravans, sky diving, blockading roads and major highways, a motorized caravan of more than 3,000 participants, pot banging, protest songs, prayer and mass, a 5k run, graffiti, street art, performing art, kite flying, removal of the governor’s portrait from government agencies, direct calls to La Fortaleza, singing patriotic songs, mass marches, yoga, and coffee art were all ways people registered their grievances against the government.

Music also took a central role in the protest. Puerto Rican folk music (such as bomba and plena), long associated with resistance to slavery and colonial rule, were an integral part of the protests in front of La Fortaleza.

The variety of tactics helped to engage different sectors of society that had previously been marginalized from participating in protest and marked the first time many had ever engaged in an act of civil resistance. Social media played a major part in the mobilization and dissemination of the protests. The hashtags #rickyrenuncia and #rickydictador became trending topics on platforms like Twitter and Instagram.

The cases of violence that occurred during the protest were most often initiated by police, who were most likely to use violent force against protesters after midnight—as if constitutional protections had a curfew.

Several weeks have passed since the first people marched to the governor’s residence demanding his resignation and the movement shows no sign of dissipating. On August 4, thousands gathered in front of La Fortaleza for a protest organized by the Campamento en Contra de las Cenizas en Peñuelas (Camp Against the Deposit of Coal Ashes in Peñuelas) calling for Pedro Pierluisi to step down from his newly appointed office (first as secretary of state and then secretly sworn in as governor as Roselló made his exit). Before “Ricky Leaks,” Pierluisi was a lawyer for the Fiscal Control Board and a lobbyist for Applied Energy System (AES)—a group responsible for the contamination of aquifers in Puerto Rico by their coal plant. He is also known to have worked against the rights of women and LGTTBQ. On August 7, the Supreme Court of Puerto Rico ruled that Pierluisi was not the legitimate governor of the archipelago.

Now, Puerto Ricans are demanding an accountable form of government, one that would end the corruption and listen to the people’s demands. The current political and economic system in Puerto Rico is experiencing what many are calling a “collapse of the colonial system.” Puerto Rico has been in an economic recession for 13 years. The people are clearly calling for a participatory democracy, as reflected by the People’s Assemblies that are currently taking place throughout the archipelago.

“This is a fight for democracy and decolonization…The people are asking for respect, transparency, and a decolonization process,” Smith Torres said.

The talk of revolution, a radical change to the entire system of government, is still afoot in Puerto Rico. What has already crystallized here this summer, though, is that ordinary people have become the protagonists in their political sphere. As Smith Torres put it, this summer in Puerto Rico has “vindicate[d] current social struggles and protests and shown us what we are capable of.”

Originally posted at Minds of the Movement.