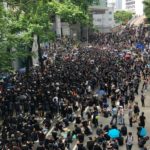 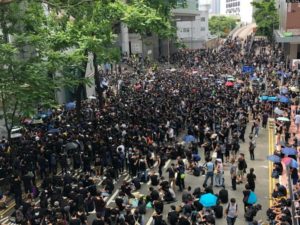 Ecosocialists must stand in support of the millions of democracy protesters in Hong Kong and call on American trade unions and the left to join us. The Chinese Communist Party is on a suicide mission to destroy planet Earth in its all-out drive to maximize economic growth to save the party-state ruling class even if that growth produces CO2 emissions that precipitate planetary ecological collapse. China’s emissions are already more than twice as large as those of the U.S. and growing, with a GDP just 63 % the size of the U.S. The Communist Party cannot rein in those emissions in because cutting emissions means cutting growth and even the slightest economic slowdown threatens their grip on power. Xi Jinping already faces wide and growing opposition to his policies which is why he’s cracking down so brutally, jailing dissidents, democrats, trade union activists, Marxist students, feminists, locking up millions in “re-education” concentration camps in Xinjiang and Tibet, and openly threatening to massacre Hong Kong democracy activists as Deng Xiaoping did 30 years ago in Tiananmen.[1] Right now, the main threat to Xi Jinping is the incredibly brave democracy protest movement in Hong Kong led by young Chinese who feel they’re literally fighting for their lives because if they lose, they face imprisonment or worse, much worse.[2] Xi is terrified that this movement will spread to China and he has reasons to fear exactly this.[3] Hong Kong will never be free until all of China is free. Correlatively, the Chinese will never be able to suppress their country’s suicidal global warming emissions so long as the Communist Party remains in power. Thus replacing the Communist Party with bottom-up multi-party mass democracy must be the common objective of democrats, Chinese and all workers, socialists and ecosocialists everywhere. We must condemn Donald Trump’s despicable support for Xi Jinping against the democracy protesters. And we must warn Xi Jinping that if he sends in his army to crush the protests, the world won’t stop until  the Chinese Communist Party is swept into the dustbin of history.

Even as his own State Department supports the Hong Kong protesters’ right to freedom of expression, even as his State Department demands that China immediately release veteran human rights activist Huang Qi (sentenced to 12 years in prison on July 29th)[4], even as tens of thousands of Hong Kong civil servants joined the protests demanding their employer withdraw its hated extradition law, even as the Chinese Army’s Hong Kong Garrison published a video on August 7th threatening another and far more violent Tiananmen crackdown against an entire city of seven million,[5] the disgraceful fascist-loving POTUS Donald Trump denounced China’s protesters as “rioters,” parroting Beijing’s line and announced that his administration would take a hands-off position on Hong Kong: “That’s between Hong Kong and China.”[6] With these words, Donald Trump greenlighted what could be the bloodiest crackdown in history.

The Hong Kong people’s fight against Beijing-imposed Carrie Lam government’s extradition law and against China’s dismantling of what few democratic institutions and freedoms still remain from the 50-year “One Country Two Systems” treaty of 1997 is our fight and labor’s fight as much as theirs. Around the world, we find ourselves engaged in a global struggle for democracy against authoritarianism and totalitarianism, a struggle in which, to add to our difficulties we have the spectacle of Donald Trump joining with the world’s worst authoritarians against democracy – “America against the West” as one author put it.[7] In his open support of thug regimes from Saudi Arabia to China, Brazil to the Philippines, as well as his embrace of American Nazis and the KKK, Donald Trump is nothing if not consistent: As an authoritarian economic nationalist, it’s rational and consistent for him to levy tariffs on China’s imports while, simultaneously, politically backing Chinese police state totalitarianism.

At this critical moment in history, the global struggle for democracy is centered in the former British colonial entrepot of Hong Kong. Hong Kong is Communist China’s Berlin – an island enclave where citizens enjoy free speech, a free press, the right to freely associate and organize, top-flight universities that teach critical thinking instead of Xi Jinping Thought, free trade unions, and (limited) democracy – none of which exist in China and all of which are under relentless attack by Xi’s “socialist” government. To be sure, Hong Kong is a capitalist enclave. But it’s no small irony that Hong Kong workers enjoy democratic rights and freedoms including the right to vote for (some) office holders and the right to organize independent trade unions that are denied them in the PRC police state. That’s why Hong Kong poses a mortal threat to the Chinese Communist Party and this is why as democratic socialists we must resolutely and unequivocally support the Hong Kongers’ fight against Xi’s government.

The Communist Party postures as a “socialist” “victim” of U.S. imperialism and warns the U.S. and the rest of the world to mind our own business. But it’s not socialist, it’s not the victim, this is no reprise of the Opium Wars and Hong Kong should be the whole world’s concern. The Chinese Communist Party is victimizer not victim. It built its industrial economy by means of relentless and pitiless exploitation of hundreds of millions of its own powerless and coerced migrant workers, by expropriating hundreds of millions of peasant farmers, by systematically ripping off tech and intellectual property from Western firms, universities and governments, and by denying China’s citizens of any say in government whatsoever. What’s more, the Chinese party-state is a full-blown and fiercely repressive imperialist occupier of Tibet and Xinjiang where it’s imposing Han settler states. The Communist Party in no way represents socialism or any progressive values whatsoever. It is a repressive totalitarian party of gangster capitalists running the world’s most powerful police state.[8] If Xi is not stopped, he will invade Hong Kong, possibly massacre thousands of people and turn Hong Kong into a vast concentration camp. As democratic socialists and ecosocialists we call on Western democratic governments, Western trade unions, and all progressive organizations to come to the aid of Hong Kong’s desperate citizens.

We say to Western trade unions: China’s workers are not your enemy. They did not steal your jobs. Your own employers abandoned their factories in the U.S. and Europe and offshored your jobs to China to take advantage of China’s police state-enforced ultra-low wages and lack of an effective OSHA and EPA. The way to get jobs back in the U.S. is not to beat up on Chinese workers but to support their struggles to raise their own wages, win free trade unions, and equalize industrial wages around the world, thus rendering offshoring unprofitable. This is both a moral imperative and in your own material interest.

We say to the U.S. Congress and particularly to AOC and her newly elected leftist comrades, the democracy movement in Hong Kong presents you with an opportunity as well as an obligation to act on the principles for which the U.S. government claims to stand but which it so often violates – to stand up for democracy, free speech, a free press, the freedom to organize. There are practical steps they can take. For a start, since the U.S. is the main supplier of crowd control gear to the Hong Kong police, Hong Kong democracy activists and Amnesty International are calling on Western governments to stop arming the police. On August 3rd Joshua Wong  tweeted: “All these weapons are imported from the United States. Given the innumerable proof of police brutality in recent protests, all countries should call a halt to the sale of arms to the notorious Hong Kong Police.”[9] Demosisto, the main pro-democracy party sent a petition to the White House (with more than 55,000 signatures as of July 31st) urging the US government to “suspend any export application of crowd control equipment to Hong Kong to prevent further brutality against Hong Kongers.” Trump backs Xi but Congress could stop those weapons shipments. Alexandria Ocasio-Cortez and other DSA elected representatives should take the lead in supporting democracy in Hong Kong as in the U.S. and in so-doing shine a klieg light on Trump’s outrageous hypocrisy in posturing as a defender of “Western values” against China, while simultaneously arming democracy’s enemies in Hong Kong.