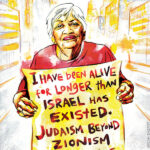 They may not call themselves anti-Zionists, but the newest poll numbers show that a quarter of U.S. Jews fundamentally oppose the Zionist project.  They reject the Zionist movement’s goals for Jews to take over the land of Palestine and to make the resulting country a Jewish-supremacist state. American Jews are becoming less inward looking, less white, less religious, and thus increasingly different politically than Israeli Jews.  That’s all to the good.

In July the results of a poll were released that had been commissioned by the  by the Jewish Electorate Institute,  which Haaretz says is a group led by prominent Jewish Democrats. The results were shocking to anyone who has been looking at these kinds of polls over the years.  A quarter of U.S. Jews agreed with the statement that Israel was an “apartheid state”.   22 percent agreed that “Israel is committing genocide against the Palestinians”.  On another question, “34 percent agreed that “Israel’s treatment of Palestinians is similar to racism in the United States”.  According to Haaretz, “20 percent said they preferred establishing one state that is neither Jewish nor Palestinian” encompassing Israel, the West Bank and Gaza.  In the Jerusalem Post a furious Rabbi Pruzansky wrote, “A whopping 38% of American Jews felt no ‘emotional attachment’ to Israel”.

Anti-Zionism is doing even better among younger people.  Ron Kampeas in Haaretz wrote, “A third of younger voters agreed that Israel is committing genocide, … more than a third agreed that Israel is an apartheid state.”  Realize young American Jews are turning more democratic and critical of Zionist practices while the trend in Israel is the reverse, with young people moving to the fascist right, and fast.

The Haaretz podcast  discussed the matter on July 19.  Interviewer Simon Spungin, spoke to Alon Pinkas , a former Israeli consul general and semi-retired Haaretz columnist Bradley Burston.  They agreed the results of the poll were “startling”.  Yet they weren’t totally surprised.  Pinkas said that there was a “growing disconnect” between a “majority” of US Jews and Israel.  Asked about whether Jewish organizations had failed, Pinkas said all the big establishment Jewish organization were “no longer relevant to American Jews.”  Spungin noted a recent Pew survey in which the top concern for American Jews was “climate change”.  Pinkas said that in election exit polls with self-defined Jews when asked what issues influenced their vote “Israel never figures in the top 5 and seldom in the top 10.”  Burston said, Israel is seen as a “burden to many American Jews” and “not as a source of pride anymore.”

Why is this happening?  One reason is that the Israeli government has pretty much given up on American Jews.  That may sound crazy considering all that US Jews have done for Israel, but it’s true.  Sure, Israeli officials come to the AIPAC conventions and orate on their undying love for American Jews, but that’s just window dressing.  Years ago Netanyahu abandoned the usual big tent approach and hitched Israel’s fortunes to the U.S. Republican Party even though US Jews vote Democratic overwhelmingly.  It’s unclear if the new Israeli government which is a mixture of Old Right, Settler Right, Liberal Sell-Out Right and Opportunistic Arab Right will try to reverse that strategy.

Consider the words of Ron Dermer, an American-born Israeli whose father and brother were at times Mayor of Miami Beach. Dermer was Netanyahu’s ambassador to the United States from 2013 to 2020, a very influential post.  This May there was a piece about an interview he had given in the Times of Israel (TOI).  According to the TOI he said, “About 25% [of Americans] — some people think more — are evangelical Christians. Less than two percent of Americans are Jews,” he said. “So if you look just at numbers, you should be spending a lot more time doing outreach to Evangelical Christians than you would do to Jews.”  Dermer also mentioned how enthusiastic the Evangelicals were for Israel while noting American Jews are “disproportionately among our critics.”

But why abandon U.S. Jews who have poured so much money and effort to support Israel?  For one thing there’s demographics.  Jews are a very small part of the U.S. population, and they no longer stick among themselves.  Jews are intermarrying with non-Jews.  For a millennium a Jew who married out of the faith was shunned, but in recent decades in the U.S. most Jews marry non-Jews. In 1990 a survey commissioned by the what is now called the Jewish Federation of North America found that 52% of Jews were married to non-Jews, way up from only 9% in 1965.  The prestigious Pew Research Center (Pew) found that by 2005 the percent had gone up further to 58%.  Now, that doesn’t mean the percent of Jews in the US has gone down because people in mixed marriage can raise their kids to be Jews (religiously or culturally).   Pew says the percent of Jews is steady at 2.4%.  Nevertheless some important Israelis are hysterical about intermarriage calling it a “plague” or even a “2nd Holocaust”.  In 2017 an Israeli right-wing paper reported that Netanyahu told aides that in two generations non-Orthodox U.S. Jews will “disappear”. If you think that way, it is logical to make your main ally to be Christian Zionists rather than U.S. Jews.

It has worked the other way round, too.  Religious American Jews are mostly of the “Reform” or “Conservative” denominations.  Yet in Israel rabbis of these denominations may not officiate at weddings.  Only Orthodox rabbis can do that.  These rabbis won’t marry Jews with non-Jews and they’re very picky to make sure a person who claims to be a Jews is Jewish according to ancient Jewish law.  For instance  Artem Dolgopyat, who won a gold medal for Israel this year in the Olympics, cannot get married in Israel.  His mother’s side of the family is not Jewish. There is also the question of the Western Wall in Jerusalem.  After years and years of bargaining a compromise was worked out allowing a space where men and women could pray together at the wall using non-Orthodox rituals.  In 2017 the Israeli government refused to pass the compromise. Mixed prayer remains forbidden.  There’s also the fact that erasures of pictures of women on billboards and signs by ultra-orthodox Jews are “constantly happening” and rarely punished.  This is all rather repulsive to most American Jews.

Pew said this about its 2020 survey, “Overall, about a quarter of U.S. Jewish adults (27%) do not identify with the Jewish religion: They consider themselves to be Jewish ethnically, culturally or by family background and have a Jewish parent or were raised Jewish, but they answer a question about their current religion by describing themselves as atheist, agnostic or ‘nothing in particular’ rather than as Jewish. Among Jewish adults under 30, four-in-ten describe themselves this way.  So the second biggest section of U.S. Jews after “Reform” are those Jews who don’t follow the Jewish religion!  In terms of an Israel that increasingly sees it legitimacy in religious terms this is quite a development.  Of a lesser degree of importance is the increasingly diversity among US Jews.  Pew found that while Jewish adults as a whole are 8% non-white, young Jewish adults are 15% non-white.

Then there is Israel and Donald Trump.  Netanyahu embraced Trump and Israeli Jews  overwhelmingly approved of him  This didn’t play well with U.S. Jews, not with Trump surrounding himself with Alt-Right advisors, saying the Nazis at Charlottesville were “fine people” and with him ramping up hate generally just before the largest massacre of Jews in US history (Tree of Life Synagogue, Pittsburgh).  Jews voted overwhelmingly against Trump in 2020. Only 30.5% voted for him according to the Republican Jewish Coalition.  The estimate from the soft-Zionist group J-street was even less, just 21%.

Are U.S. Jews anti-Zionist as a whole?  Of course not.  The majority still toe the Zionist line, some with blind fury.  But it’s time to recognize that a substantial number of U.S. Jews have split from the long American Jewish consensus that Israel-can-do-no-wrong.  A quarter of U.S. Jews in fact find Israel generally to be in the wrong.    It’s time for the media that runs only to AIPAC, the ADL, the Jewish Federation and the soft Zionists to start talking also to leaders of JVP, and IfNotNow and the many unaffiliated Jewish activists who are fed up to the kishkas with Israeli apartheid and Israeli warfare.

Say it out loud, “We’re Anti-Zionist and we’re proud.”