The 'War' against Islamic State: A Military Strategy Doomed to Political Failure 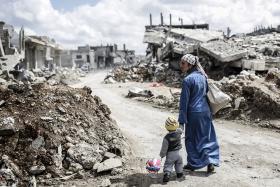 The last terrible terrorist attack by the so-called “Islamic State” (also known as Daech) killed at least 300 people in Baghdad’s central shopping district of Karrada on July 2. It was the worst single car bomb attack in Iraq since U.S. and British led forces toppled the dictator Saddam Hussein 13 years ago and deepened the anger of many Iraqis over the weak performance of the security apparatus. This followed other terrorist attacks in the region and elsewhere. This put forward once more the question on how to answer and end the threat that represents Daech. The Western states led by the USA have shown that they consider Daech as the main enemy for the region of the Middle East and North Africa. Daech constitutes in the opinion of Western officials a source of regional and international instability, particularly with the terrorist attacks in West. However they propose to use the same elements that fueled the development of Daech to try to stop it militarily. This is therefore a recipe for defeat.

In Syria, the United States, as well as other Western states, have been concentrating their military actions against Daech, while a change of the authoritarian Assad regime is not at all on the agenda, and actually never was.  In addition to this, on June 30, the Obama administration proposed a new agreement on Syria with the Russian government that would deepen military cooperation between the two countries against Daech and Jabhat al-Nusra, al-Qaeda’s branch in Syria, in exchange for Russia getting the Assad regime to stop bombing groups of the FSA with contacts with the USA. The allies (Russia, Iran, Hezbollah and Iraqi Shi’a fundamentalist militias) of the regime continue on their sides their military assistance to Damascus to eliminate all forms of armed opposition, democratic (Free Syrian Army) and reactionary (Jabhat al-Nusra and Daech) while continuing their crimes and abuses against Syrian civilians. The raids of the Russian aviation on June 25 against the town of al-Kouriyé, southeast of the city of Deir Ezzor, for example, have killed 31 civilians, while 16 others died without anyone knowing if they were civilians or jihadists.

The only political groups that will benefit from these bombings are effectively the two sides of the counter revolutions: the Assad regimes on one side and the reactionary Islamic and Jihadist political forces. The Assad regime as we have seen since Russian intervention in October 2015 benefited from these bombings militarily with the weakening of various armed groups, but more particularly FSA groups in various regions, which were the real targets of the Russian intervention rather than Daech or Jabhat al-Nusra, while civilians also suffered enormously from these bombings. At the same time, Assad forces have actually continued its attacks on various areas of the country, especially on the besieged liberated areas of Aleppo, but moreover the regime sees another opportunity to regain “legitimacy” with the West as part of an alliance in the War against Terrorism. On the other side, if the bombing really target Daech and Jabhat al Nusra, it will probably weaken them on the short term military, but will also most likely to prove counterproductive for the Syrian revolutionaries upholding the objectives of the revolution by increasing the popular support for Daech and Jabhat al-Nusra and other reactionary forces, driving even more recruits to their ranks, by describing themselves as the only serious group fighting the “infidel” Assad regime and Russia and Western “Crusaders”. These bombings also occur while the various Western international powers did and are not envisaging any action against the Assad regime, which continues its murderous war against the Free Syrian people. We have seen as soon that the truce, even partial, was implemented, the democratic popular movement started once again its demonstrations against the regime, but also challenged jihadist forces such as Jabhat al-Nusra. The people of the city of Maaret al-Nuuman have been resisting Jabhat al-Nusra for more than 100 days now. The only solution to put an end to both the Assad regime and Islamic fundamentalist forces is to empower the democratic popular movement and FSA democratic groups upholding the objectives of the revolution and uniting the various components of the Syrian people to challenge sectarianism and racism.

In Iraq, the fight against Daech is led by the Iraqi army and its elite groups, but also by Shi’a fundamentalist militias supported politically, economically and militarily by the Islamic Republic of Iran and especially hated by large sections Sunni populations in Iraq because of their crimes and abuses against them and their sectarian discourses and practices. Some Pasdaran’s senior officials of the Iranian regime and senior commanders of Iraqi Shi’a fundamentalist militias have actually appeared often on the front lines of fighting and participate in military elaborations with the generals of the Iraqi army in the offensive against Daech. At the End of May 2016, the head of the Revolutionary Guards’ elite Quds Force, Iranian General Qassem Soleimani, was spotted visiting Shi’a fundamentalist paramilitary forces fighting alongside the Iraqi army to drive Daech out of the Sunni city of Falluja, prompting harsh criticisms from various Iraqi Sunni political forces in the country. In the beginning of June 2016, it was reported that a 17-month U.S. effort to retrain and reunify Iraq’s regular army has failed to create a large number of effective Iraqi combat units or limit the power of sectarian militias, according to current and former U.S. military and civilian officials. The Iraqi military operations command of Salahuddin province, north of Baghdad, is dominated by a Shi’a fundamentalist militia leader, Abu Mehdi Mohandis, Mohandis who serves as the chief state administrator for Shi’a fundamentalist paramilitary forces. The U.S. Treasury sanctioned him in 2009 for allegedly attacking U.S. forces in Iraq. He was also convicted in absentia by Kuwaiti courts for the 1983 bombings of the U.S. and French embassies in Kuwait. The Fifth Iraqi Army Division in eastern Diyala province is considered to be under the command of the Badr group, a powerful Shi’a fundamentalist militia and political party with strong ties to Iran’s Islamic Revolutionary Guards Corps. In Baghdad, U.S. military officers estimate that 10 percent to 20 percent of the 300 officers who run the Iraqi military’s Operations Command have an affinity or association with either the Badr militia or the Shi’a religious leader Muqtada al Sadr.

The solution to end the jihadist reactionary forces of Daech cannot only be military and especially not with forces such as the Shi’a Fundamentalist sectarian forces supported by the IRI [Iran] and with a government led by the Dawa Party, which has been characterised under the former Prime Minister Maliki between 2006 and 2014 by sectarian [ism] and authoritarian [ism] that alienated the great majority of the Iraqi Sunni population, while repressing democratic popular movements challenging the whole sectarian and bourgeois regime. The new Prime Minister Abadi from the same party, Dawa, despite rhetorical propaganda, has not made any radical changes regarding this situation. These are all elements that played an important role in fuelling the development of Daech in Iraq. These two actors, Shi’a fundamentalist sectarian forces and Daech, feed each other and have to be overthrown and defeated in order of hoping to build a social and progressive popular movement opposing sectarianism enabling Iraq to end a nightmare that has lasted too long. This has actually been expressed by large sections of the democratic popular movement that erupted in Iraq in the summer 2015 challenging the Iraqi sectarian political regime with slogans such as “the parliament and the Islamic State are two sides of the same coin”, “Daech was born out of your corruption”.

In Libya, the Western states supported the formation of a unity government, who are trying to bring together the various Libyan parties, with two priorities as stated by them: the fight against Daech and “illegal immigration”. The political and socio-economic issues are virtually ignored, while the unity government is hardly able to extend its authority throughout the whole territory, particularly in the east, in Cyrenaica, where  four ministers of the unity government resigned on July 1st. In this eastern part of Libya, militias and units of the Libyan army remain loyal to unrecognized authorities, under the command of the controversial General Khalifa Haftar. Several European countries have already pledged tens of millions of euros in support for the unity government.

This is not to mention the support of Western states, to the Egyptian regime headed by the dictator Sissi who continues its violent crackdown against all forms of opposition, from leftist movements to the Muslim Brotherhoods. The massive repression of the Egyptian regime has indeed created new numerous Daech members in the country. Similar support for other dictators and authoritarian governments in the region has similar consequences such as in the case of Saudi Arabia and other Gulf monarchies. On this issue, the war between on one side the Saudi kingdom and the other side Al-Qaeda and Daech must not however make us believe that their fundamentalist and reactionary ideologies would fundamentally be different. A number of Saudi jihadists takes as references the earlier texts of Wahabism, which are the sources of official Islam in the country, and other authors of Wahabi references, but with different interpretations.

In all these cases, it is simply not enough to put an end military [a military end] to all capacities for violence of Daech, only to see its reappearance in the future as was the case in the past, but to address the socio-economic and political conditions that enable and enabled its development. We have to remember that Daech is a fundamental element of the counter revolution in the Middle East that has experienced unprecedented growth as a result of the crushing of popular movements by the authoritarian regimes. The interventions of regional and international states have greatly contributed and continue with their policies to the development of Daech. Finally, neo-liberal policies impoverishing the popular class together with the repression of democratic and trade union forces are of course also a key element in the development of Daech, which has been able in some cases to capture the frustrations of certain parts of the popular classes.

Western regimes will not change their strategies regarding the region, our duty as international solidarity movement is to oppose these policies and to support democratic and non sectarian popular movements, which continue across the region despite significant setbacks, defying both authoritarian regimes and fundamentalist religious movements such as Daech or Jabhat al-Nusra. It is these means that can stop these two forms of barbarism, instead of repeating the same mistakes of the past contributing to their rebirths.

*Dr. Joseph Daher is an assistant teacher in the university of Lausanne, Switzerland and has a PhD in Development of the university of (School of Oriental and African Studies), SOAS, London, UK. He is the founder of the blog Syria Freedom Forever. He is a Swiss/Syrian leftist activist.