Uyghur Self-Determination in the Great Game 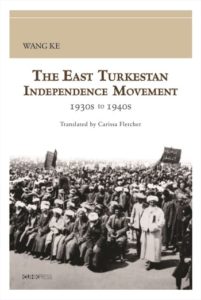 The horrific oppressive order in China’s far-western Xinjiang region—with perhaps a million or more ethnic Uyghurs (and members of other related minorities, such as Kazakhs) forcibly interned in detention camps—seems destined to create exactly what it is designed to avert: Uyghurs’ increasing aspiration to independence from the People’s Republic of China. In the diaspora, Uyghur leaders often invoke the independent republics of “East Turkestan” which were declared in the region twice over the past century—and eschew the Chinese name “Xinjiang.” What is the history of this independence movement? How could it help us understand the aspirations and frustrations of the Uyghur self-determination struggle today?

Wang Ke’s East Turkestan Independence Movement is therefore extremely timely, with the episode it traces starting nearly a century ago assuming a new and urgent relevance. It especially sheds light on the challenges for an ethnic self-determination struggle when it becomes embroiled in what theorists of empire have called the “Great Game” or “global chessboard”—phrases not actually invoked by Wang but very relevant to the story he tells.

In his introduction on the contemporary context (seemingly written just before the mass round-ups began in 2018), Wang notes some grim milestones on the path to the current polarization and repression. Most recently, the 2009 riots in Urumqi, the regional capital, left some 200 dead, including many Han residents set upon by Uyghurs. This was presaged by a 1997 uprising in the city of Ghulja in the north, which left an indeterminate number dead, including many Uyghurs at the hands of the Chinese security forces. And an early foreshadowing came in 1981 at Kashgar, the historic Silk Road city near the border with then-Soviet Kyrgyzstan in the west, where Han-Uyghur ethnic clashes left two dead and many wounded.

The Independence Movement from Qing to the People’s Republic

Ghulja and Kashgar, like Urumqi, had also been regional capitals—but these last two not of a Chinese province but of self-governing Uyghur states that claimed independence from China.

The Qing Dynasty established its “new borderland” (the literal meaning of “Xinjiang”) in the 18th century, its armies winning control over a vast area previously ruled by a succession of regional states, with varying degrees of vassalage (or none) to Beijing. Some were ruled by the Uyghur majority, a Turkic Muslim people, and some by other groups, as waves of nomads swept back and forth over the steppe and desert through the centuries.

At the time of the Qing incursion, there were two principal local regimes. One was the Dzungar Khanate in the north, between the contemporary borders with Kazakhstan, Russia and Mongolia. The other was the realm of the Kashgar Khojas, followers of the Naqshbandi sufi order who ruled a decentralized quasi-state in the west. The Dzungar were officially under Qing suzerainty, but in 1755 the Qing launched a military campaign to impose a more direct rule—although local “begs” (chieftains) would still serve as proxy administrators. The Khojas would wage an intermittent “jihad” or insurgency over the following generations.

In an 1884 reorganization, Beijing instated a more centralized administration, eliminating the “beg” system, and the name “Xinjiang” became official. It was also at this time that the Qing lifted restrictions on Han settlement in Xinjiang. The settlers became the dominant class, and the Uyghurs began to face “ethnic oppression.” But the ideologies of pan-Turkism and pan-Islamism also began to take hold among the Uyghur educated class, in what Wang calls a “Uyghur Enlightenment,” sowing the seeds of a more formal independence movement.

This would take hold a generation after the 1911 fall of the Qing state, when centralized rule had collapsed in China. It was set off by a 1933 coup in Urumqi, in which Xinjiang’s reigning warlord Jin Shuren, who was nominally loyal to the Nationalist government in Nanjing, was ousted by Sheng Shicai—who had greater allegiance to the Soviet Union. Sheng was less of a Communist than an anti-imperialist, opposing Japanese and British designs on the frontier region, and viewing China’s fractured government as too weak to counter them.

Not for the last time, rebellion by the indigenous population was seen by Han administrators as abetting foreign designs. The rebellion of the Kumul Khanate, a semi-autonomous enclave in the north, was part of what inspired Sheng’s coup. Sheng apparently saw the previous regime as exercising insufficient brutality in suppressing it. But his own rule was soon threatened both by incursions from Hui (Chinese Muslim) warlords in the east and the declaration of the East Turkestan Islamic Republic at Kashgar, in the west.

Sheng’s forces put down the Kashgar rebellion, which broke out in November 1933, in less than three months—with help from embedded Soviet troops. The Hui warlords were also expelled, similarly with Soviet aid. But real peace was never secured, and November 1944 saw a second East Turkestan Republic (ETR) declared at Ghulja, and covering much of what had been the Dzungar and Kumul khanates. This declaration was, unfortunately, punctuated by a massacre of Han civilians in Ghulja, Wang writes.

But this time the lines were drawn differently. The Ghulja declaration came just as Sheng was breaking with his erstwhile Soviet backers, fearing that Moscow was itself seeking to cultivate Xinjiang as a surrogate state. The USSR was exploiting oil and minerals in the province, and Soviet military and intelligence advisers had been wielding ever more power over Sheng’s regime—until he ejected them in a series of purges.

Moscow switched sides and began backing Ilhan Tora, leader of the ETR (himself an Uzbek who had emigrated from Soviet Central Asia). Red Army troops were now fighting for the Ghulja rebels, in what Wang calls a “Soviet-backed jihad.”

This ETR achieved effective independence, and began to approach the status of an actual nation-state—although its leadership was divided between more pro-Soviet and more Turkic-Islamic-oriented factions. There was a cabinet, judiciary, national army, and an “Interim Government Council” that acted as a kind of legislature. Kazakh nomads also took up arms in defense of the ETR, serving as an auxiliary militia force.

In Wang’s view, Moscow’s rhetoric of support for a “national revolution” masked Soviet strategic objectives—such as to retake the Maytagh oil-fields, from which the Russians had been expelled by Sheng. Eventually, Tora, like Sheng before him, grew too wary of the Soviets, who moved against him, supporting a coup to remove him in 1946.

With the end of World War II, the ETR become useful to Moscow as a bargaining chip in its negotiations with China over the shape of the post-war order. In return for dropping its support of the ETR, Moscow hoped to gain China’s recognition of an independent Outer Mongolia (as a buffer state within the Soviet sphere) and to secure acknowledgement of the USSR’s “special interests” in Manchuria (particularly, although Wang doesn’t mention them, the rail concession and maritime outpost at Port Arthur, today Dalian).

Finally, the weakened ETR was compelled by its Soviet sponsors to enter into negotiations for its reintegration back into China—first with the Nationalist government and then the Communist. The name East Turkistan Republic was formally dropped, and the entity was reorganized less ambitiously as the “Three Districts” (of Ili, where Ghulja is located; Tarbagatay and Altay).

A key moment came when a Soviet plane carrying a group of Three Districts representatives to Beijing to meet with Mao Zedong crashed in Russian territory in August 1949, killing all on board—obviously a matter of much controversy and speculation. By this time, the People’s Liberation Army had taken control of those areas of Xinjiang not under the rule of the Three Districts. The following month, the Three Districts leadership recognized the rule of the People’s Republic, and the last independent Uyghur state was officially disbanded.

Wang ends the story there, but there is obvious applicability of the dilemmas he describes to the current situation.

The Uyghurs amid U.S.-China imperial rivalry

Today, with China imposing a totalizing social control on Xinjiang in evident fear of unrest and re-emerging Islamist or ethno-nationalist consciousness, the Uyghurs again must grapple with how to advance their own interests amid Great Power manipulations. This time it is the United States that has emerged as the ultimately self-interested champion of the Uyghurs.

In November 2013, Uyghur exile leaders gathered at a government office building on Capitol Hill for a ceremony commemorating the 80th anniversary of the founding of the first East Turkestan Republic. While the ceremony wasn’t actually attended by any lawmakers (although one Republican representative sent a letter of support), it still approached official U.S. endorsement of a separatist movement within China.

But the U.S. posture has swung as blatantly over the past 20 years as the Soviet did in the previous century. The current wave of Chinese repression in Xinjiang was initially spurred by the emergence of an “East Turkestan Islamic Movement” (ETIM), which was blamed for scattered terrorist attacks. After 9-11, the ETIM was added to the U.S. “Foreign Terrorist Organizations” list, seemingly in return for Beijing’s support in Washington’s “Global War on Terrorism” and acquiescence in the US invasion of Afghanistan. It was dropped from the list in 2012, ostensibly on skepticism that the group actually exists in any organized sense.

But it is almost certainly not a coincidence that this was also just as the U.S.-China imperial rivalry was becoming inescapably apparent, evidenced by Obama’s “pivot to Asia” and Beijing’s militarization of the South China Sea. Things have only escalated since then, with Trump and Xi Jinping waging a trade war, and some alarming near-skirmishes between their respective naval forces in contested waters of the South China Sea.

So the Uyghurs are useful to Washington at the moment—but are all too likely to be betrayed at such time as their usefulness is exhausted by shifting geopolitical tides. And meanwhile, Washington’s sponsorship will play into Beijing’s propaganda that the Uyghur movement is an imperialist design.

This also poses a dilemma for progressives in the West. Last July saw the perverse spectacle of Donald Trump, who is seeking to ban Muslims from the  United States and establishing an incipient concentration camp system for undocumented migrants, hosting Uyghur representatives at a White House conference on “religious freedom.” Trump actually met at the Oval Office with Jewher Ilham, daughter of the imprisoned Uighur scholar Ilham Tothi.

The Uyghur exile leadership increasingly looks to Washington as a patron—as does the Tibetan leadership. And it is hard to fault them: the oppressed are entitled to take their allies where they can find them. However, nobody should have any illusions that the increasingly fascistic Trump administration has any degree of concern whatsoever for human rights. Activists in the U.S. face the challenge of finding ways to offer solidarity to the Uyghurs that loan no comfort to Trump, but rather draw the parallels between the authoritarian and Islamophobic agendas of Trump and Xi Jinping.

The still greater challenge within the People’s Republic is for Han-Uyghur solidarity in support of a democratic opening that will allow the Uyghurs to choose their own way. And indeed, before the present overarching dystopia began to unfold under Xi, Chinese dissidents such as Wang Lixiong did speak out against the (then far less ambitious) repression directed against Uyghurs. Of course the prospect of building this solidarity is all the more challenging given the dramatically diminishing political space in China, and the mutual animosity between the two ethnicities, stoked by the pathological dialectic of terror and repression.