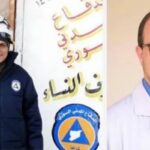 What can be done to show solidarity with Syrians, Syrians who have risen up against their tyrannical government and its bloody allies? We in Promoting Enduring Peace have wrestled with that question for years. We’ve held educational meetings, written to politicians, shown the work of Syrian artists, marched in demonstrations and the like, but we wanted to do something more.  So we thought a great gesture would be to give our Gandhi Peace Award to Syrians doing humanitarian work.

The Gandhi Peace Award has been presented since 1960. Its laureates include  Dorothy Day, Benjamin Spock, Cesar Chavez, Martin Luther King Jr., Bill McKibben, Ralph Nader, Amy Goodman, Jackson Browne and many more.  The Award comes with a $5,000 prize and a medallion fashioned from the most valuable metal on earth, “peace bronze” made of metals extracted from retired nuclear weapons systems.

We especially wanted to honor the Syrian Civil Defense (better known in the West as the “White Helmets”). Those rescue workers are heroes who dig out survivors and bodies from under the rubble. They are often targeted themselves in “double-strikes” deliberate bombings of an area for a second time just when rescue workers arrive. The White Helmets were first informal groups of people who dug people out once it became clear that Assad government rescue workers were never going to help.  Later the White Helmets raised money for equipment from a variety of sources, including Western governments. The Assad regime has been most enraged not by their saving of lives, but by their making of videos, showing the devastation caused by Assad’s barrel bombs and his chemical attacks. They’ve been subjected to incredibly vile attacks in social media by Assad’s flunkies and the Western so-called “anti-imperialists”, who admire any dictator who seem to oppose the US.

Promoting Enduring Peace (PEP) will be holding the Gandhi Peace Award ceremony online this year at 1 p.m. Eastern on Sat. November 21 on Zoom.  The award is being given jointly to a Syrian-American and a Syrian, Dr. Zaher Sahloul of Chicago and White Helmet Mayson Almisri who is now exiled in Canada.  The public worldwide may view the ceremony without charge.  The link to register for the webinar is at the website PEPeace.org.

Honoree Dr. Zaher Sahloul is a co-founder and past president of the Syrian-American Medical Society, which has built and rebuilt hospitals in Syria under attack by Russian and Assad forces; some operating underground or in caves.  He’s now president of MedGlobal, which gives crucial help to victims in fourteen countries.  His day job is as pulmonary specialist in Chicago where his works includes treatment of patients suffering from the Covid-19 virus. He himself was inflicted with the disease for weeks this spring. He recently tweeted that “I will be dedicating the #GandhiPeaceAward to the doctors and nurses who were killed in #Syria while on duty including Dr. Hasan Alaaraj, Dr. Majed Bari Dr. Wasim Moaz and 930 other healthcare workers.”

The other honoree is Mayson Almisri.  She is from Deraa, Syria where the mass demonstrations began in 2011. I interviewed her this February.  In 2011 she was a journalist for SANA, the official government press agency. She knew one of the families whose son’s notorious torture led to the demonstrations, but she couldn’t write truthfully about it for SANA.  Almisri said she would work at SANA in the morning and go with her face covered to strikes in the afternoon.  In 2012 she “escaped”, as she put it, form SANA and worked fully with the uprising.  For years demonstrations went on at a fearful price.  Her own brother was shot dead by a government sniper. Almisri helped out with first-aid after attacks and preparing material for sympathetic media. In 2014 rescue worker leaders (including Almisri) from several areas met in Jordan and formally joined together as the Syrian Civil Defense. When Deraa surrendered to Assad forces she fled to other parts of Syria and eventually to Jordan.  In 2018 was allowed into Canada as a refugee. (Recall Trump banned all refugees from Syria three years ago.).

Artists and speakers will add to the ceremony.  Dr. Sahloul will be introduced by Linda Sarsour, noted Palestinian-American activist who co-chaired the 2017 and 2019 Women’s Marches and past executive director of the Arab American Association of New York. She’s probably the best-known Palestinian activist in the U.S. We hope her appearance will help heal the rift between certain segments of the Palestinian and Syrian left communities.

Ms. Almisri will be introduced by Orlando von Einsiedel, the director of the film “The White Helmets”, a segment of which will be shown as part of the program. In 2017 this film won the Academy Award for “Best Short Documentary”.  Von Einsiedel has also directed “Virunga” which was nominated for an Academy Award in 2017 and “Lost and Found” about the persecuted Rohingya.

Music will be provided by noted Syrian performer Wasfi Massarani and American musician Dylan Connor.  There will be narrated presentations of works by Akram Swedaan who opposes war by transforming ammunition remnants into canvases , Molly Crabapple, who illustrated the book about Syria “Brothers of the Gun”, Marc Nelson who updated Goya’s anti-war paintings into a Syrian context, and Adeebah Alnemar a Syrian refugee who arrived in the US on the day Trump was elected.

We think it will be an impressive event.  Please honor Sahloul and Almisri by attending the webinar.  Register at PEPeace.org.