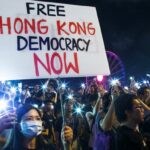 As I write, the government of the Hong Kong Special Autonomous Region (SAR) has banned the annual candlelight vigil to remember the 1989 democracy movement in China for the second consecutive year. Every June 4th since 1990 a vigil has been held in Hong Kong, and each year hundreds of thousands of people have poured into the city’s Victoria Park to remember the victims of the bloody crackdown in Tiananmen Square and keep alive the hope for a democratic China.

If last year’s ban had any credible pretense of public health concerns under the pandemic, this year the ban is simply a blunt political intervention to stop mass gathering — Hong Kong has not recorded any community transmission of Covid for over a month. Despite the ban last year, tens of thousands still showed up. For defying the ban, organizers of last year’s vigil and prominent participants have been prosecuted. If the message is still not clear, Hong Kong’s Security Bureau has threatened anyone attending this year’s vigil with up to five years in prison, and one year for simply promoting the event.

Under the threat of a sweeping national security law that has criminalized a wide range of acts of dissent and with many of the organizers of the annual vigil and opposition party leadership in prison or held awaiting trials, this may be the first time that there will not be any mass gathering to publicly remember the 1989 democracy movement in any Chinese territory. As many feared, the government’s suppression of opposition activists ranging from the most radical protesters to moderate democrats for their role in the 2019 protest movement and beyond has enveloped other areas of political life in Hong Kong.

June 4th held a special meaning to a generation of young and idealistic Chinese from the 1980s who dared to imagine a different political future for the country. The total and bloody clampdown on the protest movement on June 4, 1989, extinguished that hope not only for one generation but for many others who came after too. It has become more and more unimaginable that an event like the 1989 democracy movement could ever recur or indeed has actually occurred at all. For this reason alone, not even mentioning of the unacknowledged victims of the suppression, it needs to be remembered.

But it is easy and indeed very comforting to romanticize the 1989 movement, as many do with justification. This was the last truly mass movement in mainland China with progressive ideals: a student-led movement, participated in by tens of millions not just in Beijing but across the country, including organized contingents of supportive workers (at the time mostly state-sector employees prior to the wholesale privatization of the 1990s) and ordinary citizens (many of whom put their bodies on the line to stop the tanks from rolling into the square). The moral authority of the students and their aspirations for a more just society made the movement all the more righteous and beyond controversy.

The event is all the more important because no movement since in China has matched such a scale or had such a political and emotional impact on the participants and observers for decades. And despite censorship of the event in mainland China, its memory has served to politicize later generations of young Chinese, albeit a very small minority, including myself, who discovered this event as a key moment of their own politicization.

In mainland China, such remembrance can only be confined to small pockets, which will be harshly dealt with if found out by the authorities. Nowhere has such a mass remembrance been taking place year after year as in Hong Kong. The student protests of 1989 found reverberations among Hong Kongers, young and old, in 1989, too, who demonstrated in the tens of thousands and donated in the millions to support the protesters. The subsequent crushing of the movement disillusioned many in Hong Kong who might have hoped to live under a more democratic system after the handover of the territory to Chinese rule in 1997. Out of the disappointment and disillusionment, an annual public vigil has been organized for over three decades.

But even without the bans and threats of criminal charges, some in Hong Kong have been turning away from the annual vigil. New generations of Hong Kongers are fighting their own battles against the city’s erosion of freedom and waves of political prosecutions. Many are asserting their local and localist identities, and feeling much less affinity with mainland students from two generations ago or their counterparts today. Why remember June 4th when the city is burning? It feels irrelevant at best, and a political distraction from Hong Kong’s own movement at worst. Do they have a point?

I admit that years ago I too had my misgivings about such remembrance for not entirely dissimilar reasons. Had the annual vigil become too ritualized and divorced from any actual movements on the ground? After all, in mainland China there have been no movements explicitly drawing inspiration from and seeing themselves as a continuation of the 1989 democracy movement. Even apart from the state censorship of June 4th  commemorations, does the event resonate at all with young Chinese today, or Hong Kong youth for that matter? I was not sure it would, and I am still not sure now.

My own ambivalence arises out of a sense of frustration with the too comfortable way of remembering June 4th. It’s been talked about and commemorated year after year, in pretty much the same ways and often by the same former student leaders who for the most part had not been able to build new movements, to the point of mythologizing. I feel less and less a connection to a remembrance stripped of much of its content and incapable of critical self-reflection. It has too often morphed into an ossified simple story of “student-led protests crushed by authoritarian government.”

Is a different kind of remembering possible?

I think it is, but it has to start with recognizing the movement for what it was, with all its mistakes and limits, and remembering and honoring it by transcending it. There is much that was problematic within the movement, none of which is surprising to any observer. The movement leadership’s refusal to align with the masses of workers who came out again and again to support the students – until the very last days when they realized they would need their support against a strong state refusing to back down – deprived the movement of a truly mass base and source of social power.

Factionalism and disunity within the student leadership weakened the movement well before the clearing of the square on June 4th. Failure to consolidate the movement outside of the square, not only in the universities but in the workplaces, made the movement dependent on continuing student occupation of the square, but not much else as an additional and alternative basis of its power.

It was also a movement limited by a vision for a rule-based capitalist transition. It aimed to bring about a more politically plural capitalist society by curtailing some of its excesses and official corruption, but it was not a challenge to the development of capitalism itself. And, as an indictment of their political judgments, much of the student leadership, many of whom were exiled or self-exiled in the years since, later aligned themselves with questionable and right-wing politics out of steps with progressive movements.

None of this is to negate the mass movement in 1989 itself, and one may well read these criticisms as unfair to the at the time extremely young student leadership who had little political experience up to that point. But to make the remembrance relevant, and more than just a comforting moment, it has to go beyond the romanticization. The remembrance, either in Hong Kong or elsewhere outside China, cannot be simply a retelling of the heroics and a condemnation of the government for its brutality, as true as we find them.

It should also not stop at the recognition of mistakes and limits. How to avoid their repetition and find better ways to build mass movements is the real goal. The social movements in China, be they labor, feminist, LGBTQ, environmental, or rural,  in their current forms have largely emerged only after 1989, and later generations of youth have played important roles in these movements. Decades of deepening capitalism, accelerated particularly after 1989, means that today’s movements for a more just society in China are different from that of 1989. The issues animating the student protesters in 1989, abuse of political power and lack of accountability, are surely still alive today. But if the movement of 1989 had presented an image of a uniform movement with unified demands which in practice subordinate diverse interests (e.g. peasants, workers) to that of the students, today’s pluralistic social movements represent aspirations more sensitive to the needs of varying social groups and classes.

Capitalist exploitation and commodification have been driving young people, rural migrant workers, and urban white-collar employees alike, into physical and mental exhaustion against which they have resorted to rebellion. Patriarchal structures and attitudes are awakening youth to take a public stance and confront violence against women and discriminations. Youth are at the center of many of these movements; they are just as young as in the past but in many ways more politically seasoned. Only by becoming connected to them and their movements can any remembrance of a past movement stand a chance of continuing to renew itself and inspire new generations for social change.