The Uprising in Minneapolis 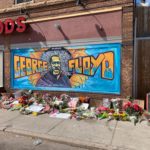 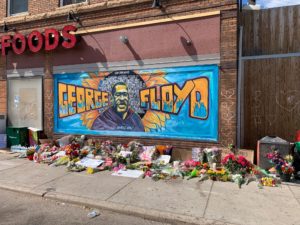 Since the the murder of George Floyd, in Minneapolis, MN, on May 25th, the city of Minneapolis has become the center of a national uprising against the murder of black and brown people by police.

By now most people have seen the horrifying video. Floyd, 46, can be seen lying face down, with Minneapolis Police Officer Derek Chauvin’s knee pressing into the back of his neck for nearly nine minutes, as witnesses plead with him to stop. Floyd can be heard on the video, posted by a 17-year-old Minneapolis resident, telling the police that he cannot breathe, and calling out to his deceased mother.

The following day, as news spread through the Twin Cities about the brutal killing, a memorial was erected at 38th and Chicago, where Floyd was murdered. Local organizers called for a march to demand the officers involved be held accountable for Floyd’s murder, which drew out close to 20,000 residents, despite the danger posed by the COVID-19 pandemic. The march went from the site of the murder, to the Minneapolis 3rd Police Precinct building, where protesters rallied peacefully. During the course of the protest, some windows of the precinct were broken, which the police used as the pretext to violently disperse the crowd with tear gas, rubber bullets, and marker rounds.

While the mayor and governor had by this time both called for charges to be pressed against the officers involved, Hennepin County Attorney Mike Freeman once again dragged his feet. Freeman is well-known in Minneapolis for failing to bring charges in cases of police violence, as was seen in the case of Jamar Clark, who was shot by police in 2015, resulting in an 18-day occupation by Black Lives Matter activists outside the Minneapolis 4th Police Precinct.

Protests against the killing of George Floyd resumed on May 27th. Throughout the day, as neighbors peacefully gathered outside the 3rd Precinct, police occasionally fired rubber bullets and marker rounds indiscriminately into the crowd. Gas was also deployed on multiple occasions throughout the day. After a full day of being antagonized by the police, the crowd eventually turned their frustration towards the surrounding businesses. Several nearby businesses were subject to looting—individual expropriation—and some buildings were burned.

While there has been some suggestion that provocateurs—cops, white supremacists, or both—began the property destruction, what followed was, in no uncertain terms, an expression of the frustration and grief of a community that had seen justice denied time and time again.

Minneapolis is one of the most segregated cities in the United States, and is no stranger to racist police violence. Residents of the Twin Cities have marched, occupied, and protested peacefully for years to demand justice for the victims of brutality at the hands of the police. Despite promises from elected officials that claim to be taking racial inequities in policing seriously, very little has actually changed.

Following the property destruction and looting of the night before, a group of residents descended on a Target store in Saint Paul’s Midway neighborhood, which primarily consists of strip malls, department stores, and other commercial buildings. This resulted in clashes with Saint Paul police that extended late into the night, and resulted in several businesses being burned.

Over the course of the day, news broke that Minnesota Governor Tim Walz was calling up the National Guard to suppress what was quickly becoming an open rebellion.

That evening, protestors returned to the 3rd Precinct. More businesses were burned, as police continued to employ so-called less-lethal munitions and tear gas against protestors. At one point in the night, Minneapolis Mayor Jacob Frey ordered the police to abandon the 3rd Precinct. Protestors overran the security barriers that had been erected to protect the building. They set the building alight, burning the headquarters of the officers that murdered George Floyd.

The burning of the 3rd Precinct represented the climax of the phase of the struggle for George Floyd that had been marked by burning buildings and clashes with police. The next day, the Governor announced a strict curfew. Elected officials began promoting the idea that the rioting and looting was the doing of out-of-state agitators.

They also arrested Derek Chauvin. He was the officer that had his knee on Floyd’s neck, and therefore was the one most clearly responsible for his death. County Attorney Mike Freeman charged him with 3rd degree murder, and second degree manslaughter. This was the first time in the history of the state of Minnesota that a white police officer had been charged for the murder of a black person.

The charges brought against Chauvin were the first major victory for Black Lives Matter activists and organizations in the struggle to get justice for George Floyd. Over the course of the following weekend, and into the next week, peaceful protests of thousands took place across the Twin Cities, sometimes at the same time. That weekend ended with the announcement that the governor was appointing Minnesota Attorney General, and former Congress member, Keith Ellison to take over the Floyd case from Mike Freeman.

In the days that followed, Minneapolis Public Schools voted to end their contract with the Minneapolis Police Department, effectively removing cops from Minneapolis schools, and at the time of this writing the Minneapolis Parks Board is considering ending their relationship with the cops, as well. (The University of Minnesota had ended their contract that stationed MPD officers at sporting events in the early days of the uprising.) The state and regional labor federations put out the call for the resignation of police union head Bob Kroll, who has been a consistent cheerleader in defense of killer cops in Minneapolis. Most strikingly, the Minneapolis City Council began discussing the possibility of disbanding the police entirely.

Attorney General Ellison, since taking over the case, has increased the charges against Derek Chauvin to second degree murder, and has brought aiding and abetting charges against the other three officers involved. It is, however, worth noting that Ellison does not have a spotless record with Black Lives Matter leaders in town, related to his inaction in the Jamar Clark case, while he was still in Congress.

The struggle for justice for George Floyd, and against the racist criminal justice system, has now spread throughout the country, with uprisings cropping up in almost every major city in the United States. For the first time, there appears to be some momentum to actual see the kind of changes that Black Lives Matter activists have been fighting for since before the murder of Michael Brown in Ferguson, MO. Now is the time to keep the pressure on, and keep fighting to ensure that black lives matter.