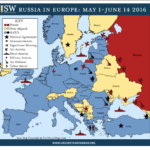 Military forces in and around Ukraine. Map from Institute for the Study of War.

Ukraine is at the center of a dangerous contest between the United States and Russia that could lead to a Russian invasion, to Western economic sanctions, to mutual cyber warfare, and, with two nuclear powers involved, could even detonate a nuclear war. At the heart of this is Ukraine’s plans to affiliate with NATO. Both U.S. President Joseph Biden and Russian President Vladimir Putin have invoked their nations’ imperial histories and current ambitions, using the Ukraine as the occasion to reassert their claims to dominate Eastern Europe.

Some time ago, Putin lamented the fall of the Soviet Union, calling it “the greatest geopolitical disaster of the 20th century.” Under both the Tsarist monarchy and then under the Soviet Union, Ukraine formed part of the empire, and Putin seems to yearn to reconquer and reincorporate it. Now Putin, claiming that the United States and its allies are threatening Russia by supporting Ukraine, has mobilized about 100,000 troops that are poised to invade.

Biden has made his own aggressive assertions. In June of last year, Biden told Western European allies, “America is back in the business of leading the world alongside nations who share our most deeply held values….We believe that NATO is vital to our ability to maintain American security for the remainder of the century.” He specifically noted, “We stand in solidarity with our valued partners Ukraine and Georgia, and we will continue to support their reforms, bringing them closer to NATO.” Biden also stated that the U.S. regards Article 5 of the NATO treaty—which states an attack on one country is an attack on all—was “a sacred commitment.”

The Ukraine, long a colony of Russia and lying between Russia and Western Europe, is deeply divided geographically and politically between pro-Western and pro-Russian politics, and so it has become a flashpoint. Independent since the collapse of the Soviet Union in 1991, Ukraine initially established relations with both the Commonwealth of Independent States, (former Soviet states) and with NATO. When former Prime Minister Viktor Yanukovych, who favored an alliance with the Soviet Union, rigged the presidential election in 2004, the Orange Revolution forced a rerun and Viktor Yushchenko, who leaned West was elected. Yanukovych, however, won the 2010 presidential election and in 2013 decided to suspend association with the European Union and instead affiliate with Russia’s Eurasia Economic Union. That led to the Euromaidan protests and the Ukrainian Revolution of 2014 in which Yanukovych was ousted and succeeded by a pro-Western president.

In response to those developments, in 2014 Putin sent Russian forces to invade and seize Ukraine’s Crimean Peninsula, claiming it for Russia. He also provoked a war in the Donbas region of Eastern Ukraine and recognized two “republics” in the Ukraine that are demanding autonomy.and still supports guerrilla troops there today. Some 13,000 people have been killed in that conflict since April 2014.

At the center of the U.S.-Russian dispute is the question of Ukraine’s affiliation with NATO. Ukraine joined the NATO Cooperation Council in 1991, cooperated with NATO ever since, and still plan to affiliate. At their 2021 summit, NATO leaders reaffirmed plans for Ukraine to become a full member, asserting that Russia would have no veto power over that decision. Putin says that the Ukraine must not join NATO and that NATO forces in Eastern Europe should be pulled back. If it does join NATO, Russia would “conduct itself as the United States would behave if offensive weapons were near the United States.” When the Soviet Union placed missiles in Cuba in 1962, the U.S. pressured the USSR to remove them and the world came close to a nuclear war.

The European far left opposes both Biden and Putin, but there is no anti-war movement in the United States and none is possible in Russia. We need to speak up now, opposing U.S. imperialism first, Russian interference as well, and supporting a movement for an independent Ukraine, one not controlled by the country’s reactionary oligarchs.