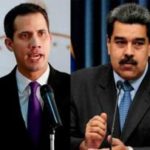 The following statement was issued by Marea Socialista, a Venezuelan organization.

Only the sovereign mobilized people can decide its destiny, in a referendum and general elections

The Venezuelan people, mobilized along all social sectors and taking to the streets from the poor neighborhoods, are demonstrating that they are fed up with Maduro. The people will no longer tolerate the policies of hunger and the destruction of labor rights, the elimination of the right to healthcare and shortages of medicine, the degradation of public services, extreme corruption and routine repression.

This explains why a large part of the population joined the marches called by the self-proclaimed Guaidó. Not because they are prepared to recognize whoever wants to snatch power, but because broad sectors of the population are fed up and don´t want any more of this. Even those who work in the public sector who remain silent or are forced to go to the government´s mobilizations to avoid retaliations at work are seeing their financial subsidies affected, or endangering their Misión Vivienda homes. Word of mouth, within Chavismo, also reflects exhaustion, annoyance and the progressive loss of fear.

Workers the people more broadly have not been able to build an independent alternative of their own to represent their real interests and to express their anguish; and they are trapped between the bureaucracy and capital. The result of this is the resurgence of polarization between the politicians of a corrupt government that controls power, and the parliamentarians of the parties of the capitalists that exploit workers.

The bosses that finance and promote the opposition parties of the traditional right have also benefited by paying the miserable wages imposed by the government of Maduro, the PSUV and the military. And their proposal is no different in this respect, as they continue unloading the cost of the crisis on the people while they secure their profits.

From the National Assembly, they aim to form a new government and use the people´s energy in their favor, because we lack strong organizations of our own to channel the struggle against Maduro´s government. But the National Assembly and the United States cannot impose governments on the Venezuelan people; neither can Maduro. They are all usurpers and they fight over the control of the state to keep the people subdued and exploited.

Our unions and popular organizations are largely destroyed, corrupted or subordinated to the state apparatus, and another part of them has ceded its political independence to the leaders of the capitalist class that exploits us. This is why, not having yet escaped the authoritarian trap of Maduro, we are already falling into the trap of the coup by Guaidó and the Voluntad Popular party backed by the United States, which defends its own interests, opposed to those of the Venezuelan people.

We are now in danger of a confrontation between two governments—both illegitimate, and one of them supported by the United States- escalating into a civil war, or more direct forms of imperialist intervention by the Trump administration. We must also alert that the government takes advantage of each attempted bower grab by the right to unleash a wave of repression to submit the people and silence all protest.

In this situation, Marea Socialista calls on people to continue on the streets protesting against the oppressive government, but we must move with our own working class and peoples´ agenda, and not behind the right wing parliamentarians or the PSUV bureaucracy, and we must not accept any foreign intervention.

Marea Socialista calls for uniting all who understand the necessity of building our own fighting organization, to raise a new political alternative of our class and popular sectors who are suffering, to defend our interests and rights.