The Agony of Academic Labor 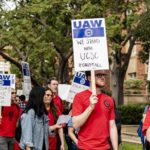 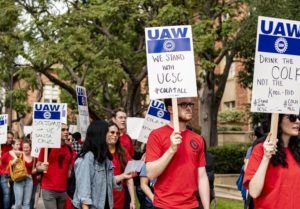 When I first considered writing a retort to Curtis Rumrill’s piece, “Why These Wildcats Will Weaken Us,” I thought it best to refute his argument on the grounds of its many inaccuracies. A retort should be straightforward enough, as Rumrill’s article is replete with false equivalencies, counterfactual presumptions, and, unfortunately, misinformation. But these serious problems would never stand if they were not wrapped in nostalgia for a time when academic judiciousness was valued more highly. Rumrill’s article tells us to beware of our un-strategic passions, but his case is made by preying on the anxieties of today’s downgraded and declassed academic labor. Rumrill’s argument, then, not only disfigures the passionate experiences that fuel class struggle. The struggle for justice has never been under the employ of movement strategists who, calculator in hand, preside over the fight from afar. Mr. Rumrill also does something else. His article traffics a dangerous idea into our political situation: that if we find ourselves moved to act, we are as doomed as we are duped.

Academics are usually trained to constrain or subordinate the passions. Emotion has no place in reasoned discourse. And, in this case, it’s a potentially poor route to success; how else is one to counter Rumrill’s homology, which perceives the collective act of striking workers as a “physics”? Ultimately, though, his argument’s persuasiveness does not depend on objective criteria. Rather, Rumrill’s articulation slyly weaves the anxieties of precarious white collar labor into an abstract, dichotomous set of archetypes: On one side, a virtuous organizer calculates the physics of the class struggle and dictates strategy from an Archemedian point. On the other, an unhinged, passion-driven radical barrels towards collective disaster. Rumrill’s articulation is not merely self-serving. This is true of any argument that relies on a false dichotomy of this sort. It is much worse. Rumrill’s thinking seriously misrepresents the legacy of class struggle and attempts to remake this legacy in a manner that complies to the norms of reasoned middle-class life.

Without emotion, class struggle does not exist. Yet our conditions as academic workers tend to distort this fact. A major problem is that the class struggle fits awkwardly with graduate students. This isn’t natural aversion, but a historical vestige. The proletarianization of white collar academic labor is, from a broad view, a relatively new condition. Residual feelings about our status and conduct still stalk us. Even in the midst of the extreme crisis of public education, with the professoriate practically decimated, it is all too easy to careen towards “reasoned” conservatism out of institutional habit and normative expectation.

This form of reasoning is baked into the legacy of the institution from which we derive our status as graduate students. The institutional justification for UC Berkeley’s distinction from, say, Cal State East Bay, is inextricably linked to the appearance of empirically-verifiable meritocratic data, be it acceptance rates, school ratings, social acclaim, Nobel laureate counts, and so on. But as recent admissions scandals at top-tier universities have clarified, the interpretation and presentation of “meritocratic data” is more ideological than empirical. Concealed is how the university works to reproduce class status. Or, at least that is what it is supposed to do.

Things have changed, particularly since the 1970s. Even UC Berkeley—despite its current status as “the world’s top public school”—has become imperiled by proletarianization. And it’s not just graduate student workers. To take one example, UC Berkeley pays lecturers poverty wages (less than $20,000 annually) and denies many basic health insurance benefits. Yet the University of California’s legacy as an institution of fine pedigree continues, thus allowing for an easy return to yesterday’s ivory prejudices—a time where reasoned superiority was set against the demands of an “agitated” and “petulant” working class.

While these days are objectively over, Rumrill’s article nevertheless preys on the desire for those extinct conditions to reemerge. His article facilitates nostalgic backsliding into a rationality that betrays the outrage that our current working conditions elicit. Why participate in a strike when one can demonstrate its futility from a safe distance?

In abstract, the desire to express one’s rational superiority is distasteful but not harmful. But Rumrill does not simply express this latent desire; he takes this set of residual, conservative feelings and politicizes them by setting imagined acts of strategic mastery against a movement that he opposes. Clearly this is harmful for the UC wildcat strikes. Rumrill’s article provides seemingly righteous cover for anyone who wishes to break the strikes, which is why UC Santa Cruz management has been circulating Rumrill’s article, and with glowing reviews. It seems plausible that Rumrill’s manifesto-like article will provide justification for strikebreaking for years to come. But there is a more immediate problem here. While many graduate students may no longer occupy the site of durable middle class life, Rumrill’s article offers a conciliatory position as the working class’s strategic gatekeepers. Under the aegis of sound strategic stewardship, we can all become the sober calculators of the class struggle.

The problem, of course, is that we cannot calculate the future of any sequence of struggle. The impossibility of knowing the future transforms Rumrill’s strategic thinking into something else: risk management. Implied in the idea of struggle-as-physics is a belief that the outcome of an episode of struggle can be known before it happens. But if we actually cannot conjure the future through scientific premonition, then all we may do is quantify our power against our enemies. As it turns out, doing this will almost always justify fleeing from confrontation, especially in dire situations that require immediate courageous action. Any quick gloss of class struggle’s long history shows that the odds are perpetually stacked against us. It’s no accident, then, that by the time Rumrill finishes his attack piece, he is already preparing to argue that we may actually never arrive ready to win. “Can we reach those numbers by 2022?” asks Rumrill about union sign-ups. “I don’t know. Maybe.” The calculators will very rarely predict “success.”

We might all appreciate a healthy dose of pessimism on occasion, but it’s actually not all dire in Rumrill’s article. For all its nay-saying, the piece also extends the possibility that graduate student workers can master the political conditions we are in, even though these conditions remain extremely unfavorable. If we work hard enough, maintain a steeled deferral for whatever it is we want, do not allow our passions to blind us, then perhaps, one day, our organizational metrics will add up to possibility. It is conspicuous, however, that Mr. Rumrill’s formula for hard work despite unreasonable odds maps onto the semi-official discourse of the neoliberal university. We will likely fail, therefore it is best to work even harder. Again, this would not be a problem if it were correct. While it may be technically true that optimistic hard work has a chance to advance career prospects for some individuals, this mantra is ill-matched for class struggle. Neoliberal self-mastery demands us to impose a technocratic regime of labor onto ourselves. Guiding this austere demand is the motivational, but mercenary, principle of self-interest. Still, collective action is fundamentally different in scope and structure than this. When we take collective action, we set aside liberal self-interest and throw ourselves into daring situations. In these moments prudence demands us to back off, but we step up for our colleagues, friends and even those who we may not know anyways. The class struggle’s dynamism isn’t made from quantitative data, even if this data could be produced. Class struggle requires active emotional bonds with others, also known as solidarity, and the desire for fundamental social transformation, sometimes called justice.

The belief that we may master our own political conditions is an unfortunate discontent of academic proletarianization. In truth, the Archimedean terrain from which the calculators of struggle are imagined to stand is that of the middling, professional managerial class. This middling class layer has, in many instances, aspired to become the overseer of class struggle, often in the capacity as an agent of the state or in partnership with particular capitalists. Rather than understanding that we don’t make history as we please, because, as Marx famously said, the class struggle does not happen under self-selected circumstances, we are presented with a depiction of our situation that seems to be under our control. But if we are to understand ourselves as part of the class movement—as an organic element within the contemporary working class—then we must learn to see things differently.

An insidious effect of Rumrill’s article is how it inoculates against connecting with the legacy of impassioned class struggle. The unhinged radical works mindlessly towards defeat because of solidaristic feelings. Their heart may be in the right place, says Rumrill, but their passionate desire makes wielding real power impossible. We are asked to subordinate our desire for justice and solidarity, or else find ourselves taken to the collective slaughterhouse. This viewpoint echoes early reactionaries, like Gustave Le Bon, who never did think that the working and peasant classes could rule themselves. These mobs, Le Bon fretted, were riven with a crowd-mentality that could never achieve the dignified consciousness of their aristocratic betters. But it was this irrationalism that also made the mob potentially dangerous. Yes, the mob never could make history happen. But they could certainly unmake it. This extreme pessimism is striking, and it’s compatibility with class struggle, which is always unpredictably linked to the activity of working class people, is questionable to say the least.

We can accept this idea of working class people only if we ignore them in their best moments. The history of working class struggle has always been at its best, truly, when collectivities have courageously stood up for themselves and for others. But where can we place these moments of impressive, passionate action of the working class if we understand struggle through Rumrill’s dichotomy? At worst, Rumrill’s article sets up a rationality for arguing that many past and present strikes have been reckless. The most charitable reading simply leaves these courageous moments of class struggle from below out of the picture.

The dichotomous construction spun in Rumrill’s article makes it appear that we can’t chew gum and walk at the same time. Rumrill’s article produces a seemingly unbreakable gulf between organization and action. Organization and action are obviously related, but their embodiment into two caricatures—the rational strategist and the irrational radical—makes them appear mutually exclusive. Fortunately, the militant activity that we have witnessed in and around the UC wildcat strikes belies Rumrill’s interpretation. Years of non-movement organizing have been achieved within weeks, with departmental organizing taking place at UC Berkeley and elsewhere. This is not to say that organizing should halt when movements aren’t happening. Organizing must continue. But neither working-class organization nor its actions are absolutely structurable activities. Each occurs in unpredictable patterns, and are always conditioned by ever-changing political situations and social circumstances. Class struggle is volatile, and it has always been the job of the state to make it less so. Beware those who do our enemies work for them.

Rather than dampening feelings of solidarity—feelings that have enabled tremendous organizational strides to take place—we should embrace them and move with the current. Yes, there are no shortcuts for building working-class power. Nor are there blueprints.