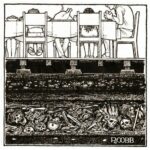 The mythic first Thanksgiving supposedly took place in 1620 when the Pilgrims who had emigrated from England to America gathered to thank God for a bountiful harvest, celebrating with the Indians who had helped them to survive their first year in Massachusetts. The real event, an encounter between the Indians and the English, was the prelude to the demographic catastrophe as disease killed most of the indigenous people and the start of the almost 300-year long conquest with the genocide of many tribes, the enslavement of others, the enormous land theft of an entire continent, and the establishment of the white, Protestant, and capitalist society that became the United States.

In modern America, Thanksgiving has mostly lost its patriotic meaning and is perhaps the most popular family holiday, celebrated by all. Though this November, there seems to be a lot less to be thankful for. Trump continues to try to overturn the result of the presidential election that he clearly lost to Joseph Biden. The pandemic is spreading unchecked throughout the country. And the economy sinks amidst shutdowns, curfews, and layoffs.

The U.S. election was a genuine expression of democracy as 155 million people voted, representing 65 percent of eligible voters, the highest participation rate since 1908. The popular vote (as of Nov. 19 with votes still being counted) was 79,548,961 votes for Biden to 73,621,808 for Trump. When all of the votes are counted, Biden will have defeated Trump in the Electoral College 306 to 232.

But Trump has filed dozens of lawsuits in various states in an attempt to overturn the election, nearly all of which have been thrown out. He plans to appeal to the Supreme Court where six out of nine justices are conservatives and three of them Trump appointees. His attorney, former New York City mayor Rudy Giuliani, still claim that the election was stolen. And another Trump lawyer, Sidney Powell, claims preposterously that “Communist money” from China, Cuba, and Venezuela is behind Biden’s fraudulent victory.

Trump appears to want to throw the election into the Congress where under an 1876 law each state in the House of Representatives would get one vote, giving the Republicans the advantage. (The Democrats now control the House based on proportional representation, but under the 1876 law the rule is one state, one vote, and the Republicans represent more states.) If Trump were to succeed at any of this, it would surely spark a national revolt.

Larger numbers of Republican politicians, however, have recognized Biden’s victory and urged Trump to do so. Still, about 80 percent of Trump voters—60 million people—believe that he won the election, and he keeps feeding them misinformation and lies. After the rightwing Fox News recognized Biden’s victory, Trump broke with Fox. Since then millions of his followers have moved to the even more extreme rightwing news shows NewsMax and One America News (AON). Trump still has his base.

Meanwhile, the Center for Diseases Control and seven state governors have urged Americans not to travel for Thanksgiving, fearing there will be myriad super-spreader events as families gather indoors in large numbers. Trump’s spokesperson on the virus, Dr. Scott Atlas, a neuroradiologist with no experience in infection diseases, urged the public to rebel against state restrictions and told people they should travel to visit their elderly relatives, the most vulnerable to the virus. So, with confusion being spread from the top and a lack of social responsibility and solidarity among the population at large, 50 million still plan to travel, about the usual number, demonstrating the country’s complete disregard for public health.

The Thanksgiving cartoon by R. Cobb was first published in the Berkeley Tribe in 1967.