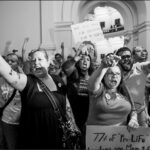 We at New Politics have been horrified by the passage of laws in Texas and Mississippi aimed at reversing Roe v. Wade, the 1973 Supreme Court decision that upheld women’s right to choose an abortion. The Texas law bans abortions after a heartbeat can be heard, usually at about six weeks, before most women typically even realize that they are pregnant. The law makes no exceptions for pregnancies resulting from rape or incest, and, instead of calling upon state officials to enforce it, deputizes private citizens to sue anyone who performs or “aids and abets” an abortion, a legal gimmick making it more difficult to declare the law unconstitutional. Mississippi’s law prohibits all abortions after 15 weeks, again with no exception for rape and incest. As these laws have come before the Supreme Court, New Politics asked several leading reproductive rights theorists and activists to assess where the struggle for abortion rights stands and what needs be done moving forward. Below are contributions from Elizabeth Rapaport, Dana Cloud, Marian Jones, and Irene Hays.