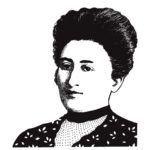 Rosa Luxemburg was a brilliant Polish/German revolutionary socialist theorist and political activist. Thoroughly committed to socialism from below, she believed in the necessity of radical class struggle principally in order to build the experience and capacities of the working class: “The struggle for reforms is its means; social revolution, its aim,” as she put it. Luxemburg held that a genuine socialist revolution could only come about by “the great majority of the working people themselves.” A strong internationalist and anti-imperialist, she opposed World War I and warned that the alternatives were stark: “socialism or barbarism.” Her understanding of the inherent barbaric tendencies of capitalism were never more relevant than today.

In honor of the centenary of her murder, a symposium on Rosa Luxemburg’s legacy was organized by the Will Miller Social Justice Lecture Series at the University of Vermont. The following three articles are based on lectures at that symposium.