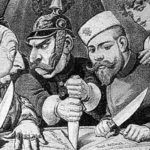 WITH MILITARISM AND AUTHORITARIANISM ON THE RISE in numerous global and regional powers, there is a crucial need for updating and strengthening a politics of socialist anti-imperialism. Historically, many on the left felt the need to ally with the Soviet
Union or China against U.S. imperialism during the Cold War era and took a “campist” approach that chose sides in the rivalries between repressive regimes. Although the Cold War ended nearly 30 years ago, significant elements on the left continue to adhere to this campist tradition. By contrast, the contributors to this symposium exemplify an authentic socialist internationalism, the tradition of “socialism from below,” which sides with the global working class and struggles for democracy everywhere. While opposing the governments of Putin’s Russia, Modi’s India, and Xi’s China, these analyses critically trace authoritarian trends on the left and right. Taken together, their critiques
and practical suggestions offer a glimpse of what a strengthened and principled socialist anti-imperialism might look like in the twenty-first century.