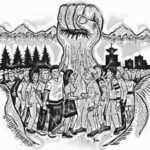 Sponsored by the Alliance of Middle Eastern and North African Socialists

Kevin Lin is an activist and researcher of China’s labor movement. He co-edits the open-access journal Made in China (https://madeinchinajournal.com) that analyzes labor and social movements in China. He works on building international labor solidarity and is a contributor to Jacobin, Labor Notes, New Politics and New Labor Forum.

Raga Makawi is a Sudanese labor activist and liaison for the Sudan Workers’ Restoration Movement.

Kamal Aissat is an Algerian university lecturer, trade unionist and has been a member of the national bureau of the higher education lecturers’ union. He was also a founding member with other trade-unionists of the Solidarity Committee with workers’ struggles in 2012. He has been very active in the current ongoing popular movement in Algeria.

Jose Bodas is the general secretary of the Unitary Federation of Oil Workers in Venezuela.

Frieda Afary produces Iranian Progressives in Translation and  is a member of the Alliance of MENA Socialists. She has written articles in English and Persian about labor and feminist struggles in Iran, socialist feminism, Marx’s Capital, and Marxist critiques of state capitalism in the former USSR and Maoist China.

Ellen David-Friedman is a retired organizer with the National Education Association in Vermont. She is a founding member of Vermont’s Progressive Party and a member of the Labor Notes policy committee.

John Reimann has been a union activist for 35 years. He is the former recording secretary of Carpenters Local 713 in the U.S. He helped organize a wildcat strike of San Francisco Bay Area carpenters in 1999 which led to his expulsion by the union bureaucracy. He produces the blog  Oaklandsocialist.com and has written various articles about solidarity with international labor struggles including Iran and Venezuela.  He has visited the workers’ movement in Mexico, Pakistan, Egypt and Venezuela.

Selma Oumari is an Algerian French member of the New Anticapitalist Party in France and a member of the Alliance of MENA Socialists. She is involved in anti-racist struggles as well as international solidarity.

The following questions will be discussed:

The last 25 minutes of the livestream will be for answering questions from the Facebook audience sent through the Facebook page of the Alliance of MENA Socialists.