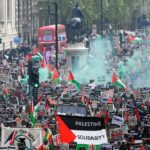 In May, tens of thousands attended the largest pro-Palestine rally in British history.

A major step was taken by the Israeli group B’Tselem in January.  The group had been set up to monitor human rights abuses in the West Bank and Gaza Strip.  It would investigate and send complaints to the Israeli military and to the press.  A couple of years ago it gave up writing to the military.  It was useless.  This January it issued a report that for the first time said that Israel (from the river to the sea) was one apartheid system.  A couple of months later a strong statement was signed by over 1,000 Israeli Jews.  It recognizes Israel’s apartheid status and says, “We refuse to accept the Jewish-supremacist regime and call upon the international community to immediately intervene in defense of the Palestinians in Gaza, the West Bank, Jerusalem, the Galilee, the Negev, al-Lydd, Yafa, Ramleh, Haifa and throughout historic Palestine.”

In May as the IDF savaged Palestinians there were lots and lots of rallies in the U.S. in protest.  In Connecticut there were rallies in not one or two cities, but in six.  35,000 turned out in Washington D.C.  More importantly demonstrations were held in places one would not suspect of having bases of support for Palestine like Fargo, North Dakota,  Birmingham Alabama,  New Orleans and in Miami, Florida. Cries of “Free Palestine” rang through the streets of Atlanta.  The biggest rally for Palestine was in London.  Tens of thousands marched past Downing Street.  “Organisers, including the Palestine Solidarity Campaign and Friends of Al-Aqsa, estimated that at least 180,000 people attended the London demonstration, making it the largest pro-Palestine protest in British history. “

An initiative that started in May showed how far things were changing among Jews.  A challenge was made to the Zionist holy of holies, the Israeli flag.  Approximately 150 Jews called for it to be taken down from its place in synagogues, Jewish Federation offices and the like.  The statement said Israeli was “an apartheid regime” and noted that apartheid has been an international crime since the 1970’s.  It declared it is “offensive to see Jewish communal spaces wave the emblem of a criminal system.”  It likened the Israeli flag to the Confederate flag, an emblem that now is defended only by diehard racists.  The wording says that Israel “since its start, has been determined to totally subjugate or remove the indigenous Palestinians from the land they’ve lived in for centuries.” and mentions the long history of Zionist organizations and the State of Israel working with Far Right and Anti-Semitic forces “even though this endangers Jews worldwide.”

Another Jewish letter started independently in May, this at Yale University.  100 Jews there issued a strong statement which said, “As a concerned group of Jewish Yalies, we call upon our peers to speak out against the atrocities committed against the Palestinian people supposedly on our behalf and in the name of our faith.  …We implore the American Jewish establishment to stop conflating Jewish identity with the state of Israel.”   Mirroring the concerns of the letter above the Yale letter stated, “We also direct our demand toward the Joseph Slifka Center for Jewish Life at Yale, a place where most of us have felt unwelcome since noting its display of the Israeli flag on Wall Street [New Haven].  We unequivocally reject its culture of silence around Palestine.”  The letter also affirmed support for BDS.

In late June the Yale College Council, which is the undergraduate student government, debated a resolution on Palestine.  Despite opposition from Yale Hillel and Yale Friends of Israel the YCC voted to endorse a statement condemning “the injustice, genocide, and ethnic cleansing occurring in Palestine.”

These moves at Yale are political bombshells.  The campus never before criticized Israel, and the statement’s language was fierce.  The Jewish establishment noticed the rebuke.  There was an article on the Yale vote on the JTA site, the Jewish Telegraph Agency, a 104 year-old Jewish institution and also in the Times of Israel.

Even more startling was the results of a poll by the Jewish Electoral Institute at the end of June.  It showed that nearly a quarter of U.S. Jews consider Israel an apartheid state. 22% of those polled said that Israel was committing “genocide” against Palestinians.

Then there was the reaction of U.S. trade unions, unprecedent support for Palestine.  That was the judgement of an In These Times (ITT) piece in late May.  It talks about a Roofer’s Local in Los Angeles, the NewsGuild-CWA — the union of 24,000 journalists across North America and UNITE HERE locals in the South and in Minnesota.  It linked to the tweet of the 8,000 member local of Teamsters UPS drivers in New York City which included the hashtags #SaveSheikhJarrah and #FreePalestine along with the message: “Solidarity with oppressed people across the world.”  The union of professors at CUNY, the City University of New York, condemned “the massacre of Palestinians by the Israeli state’’ — and denounced  Israel’s “expansionism and violent incursions into occupied territories.”  The professor’s union at Rutgers in New Jersey called for the U.S. government to “stop all aid funding human rights violations and an occupation that is illegal under international law.”  The group Labor for Palestine urged “labor bodies in the US to join the growing mass protests against apartheid Israel”, supported BDS, and proudly mentioned dock unions around the world that were refusing to handle Israeli goods.

There were interesting developments in U.S. teacher unions.  The American Federation of Teachers’ San Francisco local, the Educators of San Francisco, became the first K-12 union in the US to support the BDS movement.  Because it was approved by 100 chapters in East LA a resolution will be voted on in the Los Angeles union when schools reopen calling for a cut of all U.S. foreign aid to Israel and for support of BDS.   As the ITT article points out this is especially significant since Randi Weingarten the head of the AFT fights BDS tooth and nail and the AFT actually has $200,000 invested in Israel bonds.

The AFT’s larger sister is the National Education Association (NEA).  It’s actually the biggest union in the U.S. with three million members.  Zionists had near apoplexy when the Seattle Education Association voted in support of BDS and for ending the “Deadly Exchange” whereby Israeli and US police train each other and exchange worst practices.  The NEA met online in national convention in early July and voted down a resolution calling for an end to arms sales to Israel and Saudi Arabia by a 3-1 proportion.   The vile Stand with Us was pleased, yet considering that  delegates representing 700,000 teachers supported the resolution their glee may be short-lived.

Then in the spirit of Sherlock Holmes there was “the dog that did not bark” incident.  The Jewish Labor Committee, which always can be relied upon to line up scores of top US labor leaders to support Israeli slaughters or to condemn BDS, did nothing of the sort.  This spring it issued its own mealy-mouthed statement and that was that.

Also heartening was an open letter signed by 16,000 artists from all over the world. Among them were six Academy Award winners and eight Pulitzer Prize winning writers.   In commenting on the May violence, the letter stated, “To frame this as a war between two equal sides is false and misleading. Israel is the colonizing power. Palestine is colonized. This is not a conflict: this is apartheid.” As for what should be done the signers said, “We ask governments that are enabling this crime against humanity to apply sanctions, to mobilize levers of international accountability, and to cut trade, economic and cultural relations.”

More important than resolutions and letters are direct action and there was some notable success in stopping the Israeli company Zim from unloading its cargo on the West Coast.  There’s a group called AROC which stands for Arab Resource and Organizing Center. One of the things they’ve been organizing are crowds that go to ports and set up picket lines.  In mid-May while Israeli jets were smashing buildings in Gaza AROC organized to stop Zim in Oakland.  On May 17th Zim decided not to risk the crowd’s fury and announced it would not dock. It tried again in June, but on  June 4  1,000 people took part in the picket and the dockworkers refused to cross the line.  Zim was once again thwarted.

In Seattle AROC kept Zim ships away for weeks. Well-known socialist city councilor Kshama Sawant was present on the line. Port workers honored the line. Finally on June 17 police broke the line with arrests.  (By the way Seattle police have trained alongside Israeli cops twice in the last decade. #DeadleyExchange) Note that workers take considerable risk when they choose to honor picket lines.  In Prince Rupert in British Columbia 94 port workers who had respected a #BlockTheBoat picket were suspended for 3 days by Dubai Ports World.

Let’s conclude with an individual act of heroism.  Nick Georges, disgusted at what he saw Israelis doing to Palestinians on solidarity visits to the West Bank, decided to use his skills to put a Palestinian flag atop a structure for all to see.  The structure was a 300-foot-tall crane at a London building project near the US embassy!  Georges climbed the rungs, flew the flag and camped out precariously on a set of cords that he had brought up in his backpack.   He stayed up in alternately very cold and very hot conditions, amid various threats by police of actions that would surely have sent him to his death. Finally, after 37 hours and in a weakened state he climbed down. Admittedly, 69 year old Georges had some experience with climbing cranes, but his last climb was over 20 years ago!  See some video of Georges atop the crane here and an interview I did with him by clicking here.

Brothers, sisters, martyrs, your sacrifices were not in vain.  The tide is turning.