Solidarity with the Algerian People 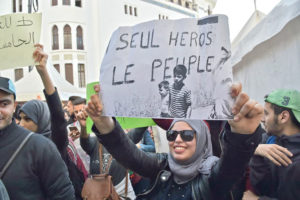 Solidarity with the Algerian people in their struggle for popular sovereignty

Renaissance of the Algerian revolution

Algeria is experiencing a popular uprising that is unprecedented since the proclamation of national independence. Since 22 February 2019, following calls launched on the Internet, large rallies, with a massive presence of women, have been organized in all cities, followed by workers and young students.

The trigger for this powerful popular anger was the obstinacy of the government in keepng Abdelaziz Bouteflika as President of the country for a fifth term – when he has already spent 20 years in office – by expanding his powers through successive amendments to the Constitution. The government’s desire to impose a very sick old man as nominal president is strongly felt as contempt for the people, and in effect as a transfer of his prerogatives to a behind-the-scenes faction.  This contempt has unleashed decades of pent-up anger against the policy of looting national wealth, dismantling the public sector, increasing domestic public debt, and further repression of democratic freedoms.

The popular struggle is growing and attracting new layers of demonstrators united by the goal of ousting Abdelaziz Bouteflika from power as soon as his term ends on 28 April 2019 and refusing to allow his defenders and all government members to be involved in determining the country’s future.

The ruling clique has so far tried to be unwavering faced with this popular uprising and manoeuvring to gain time to avoid its fall. After being convinced to hold elections to impose the sitting president’s candidacy, it decided to cancel the presidential elections and extend Bouteflika’s term in a way that violates the Constitution, which it amended at will in the hope of deceiving the demonstrators. It has even begun to implement its plan presented as a roadmap for a “new republic” built by the outgoing president.

The popular response was expressed on 16 March 2019 at the largest demonstration of millions of Algerians throughout the country, calling for the rejection both of President Bouteflika’s continuation in office after the end of his term and of the clique behind him.

This faction of the ruling regime will oppose attempts to overthrow it and will try by all possible means to escape the people’s verdict using one of the following ways:

All these options constitute a major betrayal of the popular demands.

Abdelaziz Bouteflika’s fourth presidential term is drawing to a close leaving Algeria on the brink of an economic crisis. Monetary reserves are declining at a record pace and may run out in the coming years. The budget deficit is growing significantly and the excessive printing of money will create inflation and a currency collapse that will lead to a sharp drop in purchasing power. The government wants to keep its material base by leaving the economy focused solely on specializing in the export of hydrocarbons and derived products, importing its main capital and consumer goods. It continues to benefit from oil rents, widespread corruption, and the monopoly of import and investment permits.

The imperialist institutions will use their influence to take advantage of the current situation and force Algeria to implement quickly and fully neoliberal measures such as the opening of the market to imperialist capital, the privatization of the public sector, the liberalization of the energy sector, the abolition of public subsidies for mass consumption, and cuts in public sector jobs. This neoliberal doctrine converges with the project of the liberal bourgeoisie, which also opposes Bouteflika’s clique in power on the pace of this liberalization. The implementation of these neoliberal policies will constitute a profound regression for Algerian working and popular classes and a theft of their sacrifices. Hence the responsibility of socialist activists to join forces on the basis of a programme of demands with a perspective of class independence that will accompany the mobilization and organization of the working class, youth and women for a sovereign constituent assembly that will ensure a radical democratic regime and an independent economy to meet the basic needs of the population, based on collective ownership and grassroots control.

Young people and the popular classes have played an important role in the ongoing popular struggle, as have workers, particularly public service workers. However, the intervention of workers with an independent class perspective and decisive economic strength requires the support and mobilization of workers in strategic sectors, such as petrochemicals, ports, banks, transport and logistics. This would profoundly change the balance of power and stifle the ruling clique and, more importantly, it would guarantee that the Algerian people decide the political and economic future of the country.

The Fourth International expresses its full solidarity with the struggles of the Algerian people to bring down a regime, of dictatorship, corruption and dependence, and supports its right to popular sovereignty through a sovereign Constituent Assembly.

We condemn the support of the imperialist governments for the ruling regime and their intervention in a matter that concerns the Algerian people exclusively. We hope that the dynamics of the struggles that are emerging in Morocco and Tunisia, which are also experiencing a political and social crisis, will mark the beginning of a victory of the popular revolutions that will revive the glory of the national liberation revolutions, of which the Algerian revolution was one of the symbols in the struggle against imperialism on an international scale.

We call on all socialists and democrats in the world to support the Algerian people in their struggle and to prepare themselves for the duty of international solidarity in the face of the evolution of a great struggle that is still in its infancy.

Long live the struggle of the Algerian people for their popular sovereignty!

Down with the dictatorship of corruption and archaic dependence, for a sovereign Constituent Assembly!

For international solidarity with the struggle of the Algerian people!