Six FAQs on Anti-Imperialism Today and the War in Ukraine 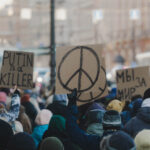 Let’s look at the facts. Consider first the left in the Global South where there have been contrasted positions. In the Arabic-speaking part of the world from which I come, the only “left” parties to have supported the Russian invasion are those that supported the bloodthirsty regime of Bashar al-Assad, under Russian protectorate. The two main communist parties in the region, those of Iraq and Sudan, unequivocally condemned the Russian invasion, while also denouncing (as it should be) the policy of US imperialism. In its statement, the Sudanese CP, after denouncing the conflicts between imperialist forces, “condemns the Russian invasion of Ukraine and demands the immediate withdrawal of Russian forces from this country while condemning the continuation by the US-led imperialist alliance of its policy of stirring up tensions and war, and threatening world peace and security.” The Sudanese Communists are well placed to know the truth about imperialism from Russia, the only one of the great powers that openly supports the putschists in their country.

As for Global South states, in the UN General Assembly vote on condemning the Russian invasion, thirty-five of them abstained. All states located in the Global North either voted for the resolution (all Western and allied countries) or against (Russia itself and Belarus). However, it does not take much insight to realize that among the 141 countries that voted for the resolution, there were far more than 35 states from the same global South. It is therefore not a “North-South divide,” but a cleavage between friends and/or clients of Western imperialism, on the one hand, and friends and/or clients of Russian imperialism, on the other. And since most of the latter are also friends and/or clients of Western imperialisms, they preferred to abstain rather than add their votes to those of the five states that voted against the resolution, which are, in addition to the two already noted, North Korea, Syria, and Eritrea.

It is true that the two most populated countries located in the Global South: China – itself the subject of debate as to its imperialist nature, which shows how simplistic the North-South scheme is in politics – and the Indian government of the fascist Narendra Modi cozied up to Russia. But among the countries that voted for the UN resolution, we find states such as AMLO’s Mexico, the Taliban’s Afghanistan, Bolsonaro’s Brazil (yet Putin’s admirer), the generals’ Myanmar (covered by Beijing), and Duterte’s Philippines.

The first thing to say is “so what?” Our support to peoples fighting imperialism shouldn’t depend on which imperialist side is backing them. Otherwise, by the same logic, justice should be sacrificed to the supreme battle against the “Western bloc,” as some argue in neo-campist pseudo-left circles. For my part, I wrote that a Russian success – an outcome that unfortunately still remains a real possibility – “would embolden US imperialism itself and its allies to continue their own aggressive behavior.” Indeed, the United States and its Western allies have already benefited enormously from Putin’s action. They should be warmly grateful to the Russian autocrat.

A successful Russian takeover of Ukraine would encourage the United States to return to the path of conquering the world by force in a context of exacerbation of the new colonial division of the world and worsening of global antagonisms, while a Russian failure – adding to the US failures in Iraq and Afghanistan – would reinforce what is called in Washington the “Vietnam syndrome.” Moreover, it seems quite obvious to me that a Russian victory would considerably strengthen warmongering and the push towards increased military spending in NATO countries, which has already gotten off to a flying start, while a Russian defeat would offer much better conditions for our battle for general disarmament and the dissolution of NATO.

If Ukraine were to succeed in rejecting the Russian yoke, it is more than likely that it would be vassalized to Western powers. But the point is that, if it fails to do so, it will be enserfed to Russia. And you don’t have to be a qualified medievalist to know that the condition of a vassal is incomparably preferable to that of a serf!

Question 3: How can we radical anti-imperialists support a resistance that is led by a rightwing bourgeois government?

Should we support a people that resists against an over-armed imperialist invasion only if its resistance is led by communists and not by a bourgeois government? This is a very old ultra-left position on the national question, which Lenin rightfully combatted in his time. A just struggle against national oppression, let alone foreign occupation, must be supported regardless of the nature of its leadership: if this fight is just, it implies that the population concerned actively participates in it and deserves support, regardless of the nature of its leadership.

It is certainly not the Ukrainian capitalists who are mobilizing en masse with the Ukrainian armed forces in the form of an improvised national guard and new-style “pétroleuses,” but the working people of Ukraine. And in their fight against Great Russian imperialism, led by an autocratic and oligarchic ultra-reactionary government in Moscow that presides over the destinies of one of the most unequal countries on the planet, the Ukrainian people deserve our full support. This certainly does not imply that we cannot criticize the Kyiv government.

If any war where each side is supported by an imperialist rival were called an inter-imperialist war, then all the wars of our time would be inter-imperialist, since as a rule, it is enough for one of the rival imperialisms to support one side for the other to support the opposite side. An inter-imperialist war is not that. It is a direct war, and not one by proxy, between two powers, each of which seeks to invade the territorial and (neo)colonial domain of the other, as was very clearly the First World War. It is a “war of rapine” on both sides, as Lenin liked to call it.

To describe the ongoing conflict in Ukraine, in which the latter country has no ambition, let alone intention, of seizing Russian territory, and in which Russia has the stated intention of subjugating Ukraine and seizing much of its territory – to call this conflict inter-imperialist, rather than an imperialist war of invasion, is an extreme distortion of reality.

The primary, most immediate, function of the supply of arms to Ukraine is therefore that it helps it oppose its enserfment, even if, on the other hand, it wishes its vassalization in the belief that it is the only guarantee of its freedom. We must, of course, also oppose its vassalization, but for the time being, the most urgent need must be addressed.

Of course, the direct entry into war of the other imperialist camp would transform the current conflict into a true inter-imperialist war, in the correct sense of the concept, a type of war to which we are categorically hostile. For now, NATO members are declaring that they will not cross the red line of sending troops to fight the Russian armed forces on Ukrainian soil, or shooting down Russian planes in Ukrainian airspace – despite Volodymyr Zelensky’s exhortations. This is because they rightly fear a fatal spiral, skeptical, as they have become, about the rationality of Putin who did not hesitate to brandish the nuclear threat from the outset.

Question 5: Can we support Western arms deliveries to Ukraine?

Since the Ukrainians’ fight against the Russian invasion is just, it is quite right to help them defend themselves against an enemy far superior in numbers and armament. That is why we are without hesitation in favor of the delivery of defensive weapons to the Ukrainian resistance. But what does this mean?

An example: we are certainly in favor of delivering anti-aircraft missiles, portable and otherwise, to the Ukrainian resistance. To oppose it would be to say that Ukrainians only have to choose between, on the one hand, being massacred and seeing their cities destroyed by the Russian air force, without having the means they need to defend themselves, or, on the other hand, fleeing their country. At the same time, however, we must not only oppose the irresponsible idea of imposing a no-fly zone over Ukraine or part of its territory; we must also oppose the delivery of air fighters to Ukraine that Zelensky has been demanding. Fighters are not strictly defensive weaponry, and their supply to Ukraine would actually risk significantly aggravating Russian bombing.

In short, we are in favor of the supply to Ukraine of anti-aircraft and anti-tank weapons, as well as all the armaments indispensable for the defense of a territory. To deny Ukraine these deliveries is simply to be guilty of failure to assist a people in danger! We have called for the delivery of such defensive weapons to the Syrian opposition in the past. The United States refused and even prevented its local allies from handing them over to the Syrians, in part because of the Israeli veto. We know what the consequences were.

Question 6: What should be our attitude toward Western sanctions inflicted upon Russia?

I wrote in my Memorandum:

“Western powers have decided a whole set of new sanctions against the Russian state for its invasion of Ukraine. Some of these may indeed curtail the ability of Putin’s autocratic regime to fund its war machine, others may be harmful to the Russian population without much affecting the regime or its oligarchic cronies. Our opposition to the Russian aggression combined with our mistrust of Western imperialist governments means that we should neither support the latter’s sanctions, nor demand that they be lifted.”

Another way to translate this is to say that we are in favor of sanctions that affect Russia’s ability to wage war as well as its oligarchs, but not those that affect its population. The latter formulation is correct in principle, but it would then have to be translated concretely. However, we do not have the means to examine the impact of the full range of sanctions already imposed by the Western powers on Russia, which is why I suggested that we should neither support the sanctions, nor demand that they be lifted as long as Russia’s criminal invasion is going on.