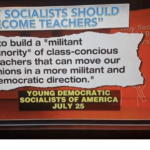 With a new generation of militant radical organizers looking to industrialize into union jobs and kick-start a new militant minority in the U.S. labor movement, their effort is receiving both wide support and wary when not damning criticism. Among the critics is Richard Steier, editor of New York’s weekly the Chief-Leader, whose “Meet the New Left, Just as Daft as the Old Left,” (September 6, 2019, here) was an unbridled attack on the effort and a defense of current laggard union practices by entrenched union tops. New Politics editorial board member Michael Hirsch responded to Steier in the Chief-Leader’s September 20 print issue. Hirsch’s note, titled by the paper as “Now You’re Selling Out,” appears below.

Based on your editor’s hit piece, “Meet the New Left, Just as Daft as the Old Left,” (The Chief, September 6, 2019), it’s safe to say “Richard, we hardly knew ya.” In 2014, reviewing his book Enough Blame to Go Around for the labor journal Working USA, I wrote “Richard Steier … is the best full-time reporter on the New York City labor beat … Steier’s work takes guts, not just in the timely writing but in the republishing of what could be dismissed as old news; at least old to city-based labor activists and those reading Steier religiously … How many scribblers can stand by their work a week after publication, let alone years or decades? Steier can. His is still instructive.”

But not so instructive in his latest piece under review.

I wasn’t alone in praising the book. Daily News columnist Juan Gonzalez wrote how ” No one knows New York City’s working men and women better than journalist Richard Steier. Whether he’s depicting the heroic exploits of legendary union leaders or exposing the excesses of corrupt labor bosses or recounting pivotal battles over labor contracts, Steier always provides fresh, behind-the-scenes insight into the vast world of municipal workers, a group that too often is unfairly maligned. And he does it all with a powerful bare-knuckle style that will leave you wishing for more.”

Steier’s publisher SUNY Press liked the two notices so much it incorporated them in its press promotions. How times have changed!

Jump ahead a mere five years and Richard is now writing encomiums for the same sort of labor tops he once rightly scolded. while excoriating young radicals for the sin of working for a variety of democratic changes in union affairs Steier once heralded. His screed against the Democratic Socialists of America’s efforts to industrialize young radicals into becoming active insurgents in unions comes with valorizing the kind of leadership an earlier Steier staked his reputation on exposing. Or is he now thinking there’s only room for one bad boy beating on a laggard union leadership?

Absent Trump and the rise of white nationalism–serious challenges to working people’s security that few doubt–has anything substantively changed in the behavior of much of the labor leadership to cause Steier to turn his head? Union officials today are beset by the same problems and the same lack of imagination, the same ferocious employers’ offensives, and suffering from the identical bureaucratic self-aggrandizing interests that Steier isolated in 2014. Union leaders in the main still ask too little of employers and public officials. They are still too beholden to centrist political allies, too risk averse, too career oriented, too afraid of their own members, too tied to employers’ end games. Too beaten and too overpaid. From the AFL-CIO’s Richard Trumka on down, too many labor leaders see Medicare for All and the Green New Deal less as necessary reforms than as dangers to their own standing as leaders. They ought to be fairly and principally challenged, not ritually praised as Steier now does. Why carry water for the heads of political machines, prizing union tops more scared of the governor than put off by employer abuses suffered by their own members?

Steier presents DSA as a shadowy organization despite its public meetings being open and widely advertised, yet his piece is largely based on the musings of one labor leader alone, and little more than a press handout touting the next mundane political venture by the Central Labor Council, as if uniting behind a solitary consensus Democratic moderate was the only winning hand for working people come November 2020. Another reporter could have interviewed any number of union activists, seeing them not so much as dour schemers than as representative of a generation of young workers not having the same access to decent paying jobs as past generations and who rightly blame capitalism for their dim job prospects. These are people forced into multiple “gig” work and themselves in need of militant unions to defend them. Is it so strange that getting union jobs is not just strategically smart but job wise as well?

Added to that, there have always been rank and file insurgencies in workplaces, even in those with the best union representation, with  informal work groups in themselves bases for countermanding arbitrary treatment by employers. So what’s so wrong about a string of newly woke young people seeing firsthand problems and trying to resolve them? Think, too,  how much more interesting one’s fulsome reporting could be if these young activists were seen as making their own history. It’d be covering news from the bottom up and not just the top down.