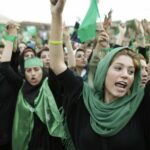 Narges Mohammadi is an Iranian feminist human rights activist and vice president of the Defenders of Human Rights Center headed by Nobel Peace Prize Laureate Shirin Ebadi. She is currently imprisoned and has been imprisoned several times since 2000 for her activities in defense of women’s rights, human rights, and children’s rights and her opposition to the death penalty.

The collection under review consists of a moving account of her prison experiences as well as her interviews with 12 other women political prisoners in Iran. It was published in 2020 while she was in prison. Since then, she has published a second volume as well. This review will focus on the first volume only.

Iran has an official prison population of 189,000 of which hundreds are political prisoners, who have protested poverty, discrimination, militarism, and authoritarianism. Many are members of oppressed national and religious minorities such as Kurds, Arabs, and Baha’is. Iran has the world’s highest rate of executions after China.

In October 2020, after contracting COVID-19, following eight and a half years in prison, Mohammadi was released, only to be re-incarcerated this past November for speaking out against the death penalty, and in solidarity with those killed by the state during and after the 2019 popular uprising. Prior to her latest arrest and imprisonment, she had also organized a women’s picket line against Taliban misogyny outside the Afghan consulate in Tehran. She is currently serving a sentence of thirty months and eighty lashes on charges of “endangering national security.”

The title of her book, White Torture, refers to the torture that solitary confinement inflicts on prisoners. Both Mohammadi’s account of her own imprisonment and her interviews with other women political prisoners, powerfully demonstrate the long-lasting physical and psychological effects of solitary confinement and the ways in which women prisoners have sought to resist this form of torture.

is not just a place and a physical-geographical location but the application of various precise mental, psychological, and human factors which give a particular meaning to the cell and guarantee its [harmful] effects. For instance the lifeless and brusque voice of the prison guard, the presence of dead roaches on the dusty tile floors, dirty and opaque curtains, eye masks for the prisoners, oversized slippers, uncovered feet, oversized and low quality clothing, small outlets called windows covered by perforated metal sheets, sitting and facing the wall for lengthy periods of time during interrogations, not facing humans face to face, hearing loud and violent noises whose distance it is difficult to surmise, seeing the indifference of doctors to the prisoners’ physical conditions, the loud banging voice of closing cell doors, having to wear an eye mask even inside the control unit and in the hallway on the way to the bathroom. . . .

Mohammadi and the women prisoners she interviews also describe other forms of torture, such as being subjected to questions about their sex lives, being falsely told that a loved one is ill or has been arrested or has died, being given addictive sedatives and unknown drugs, being forced to wait for hours to have access to a toilet, suffering intense cold in Winter and intense heat in Summer, not getting out for fresh air or seeing the sun for long periods of time, thereby losing a sense of time and place, and being denied all sorts of basic necessities.

Under these circumstances, prisoners become completely dependent on their interrogators for any improvements. Some prisoners are forced to “confess” on camera to fabricated charges in scenes set up to give the impression that they have been living in comfort in prison and eating elaborate meals.

Mahvash Shahriari, a teacher and leader of the persecuted Baha’i religious minority, was imprisoned from 2007 to 2017 for helping to organize an institute of higher education for discriminated-against Baha’i youth. She describes the particular harm of solitary confinement, which “disables our senses and takes away our mental balance.” Nevertheless, Shahriari has “contradictory feelings” about prison, which on the one hand, caused a “sense of loneliness and separation” from family, but also offered “the joy of finding valuable friends in prison and gaining unique experiences which could not have been possible without all this pain.”

Hengameh Shahidi, a women’s rights activist imprisoned for her participation in the reformist Green Movement, addresses the sexual harassment and violence that women experience at the hands of their interrogators and the ways in which prison cameras, especially in bathrooms and showers, are a form of psychological torture.

Shahidi says that access to books saved her from losing her mental balance and gave her something to look forward to.  But most of the political prisoners interviewed by Mohammadi experienced prolonged periods of solitary confinement without access to any books or newspapers. Fatemeh Mohammadi, imprisoned for having converted to Christianity, relates how in solitary confinement and without access to any reading materials “one felt that time was not moving forward.” Sadigheh Moradi and others note that poetry etched on walls by former prisoners was their only reading material.

Mohammadi and most of the women she interviewed share another experience. They are mothers who have been painfully separated from their children and often denied even phone calls or visits with them. Sadigheh Moradi wonders why her eight-year-old daughter could not lift her head to face her during their first visit. Later, her daughter told her that she was trying to hide her tears from her. Mohammadi herself was arrested when her toddler daughter had just had surgery and cried out for her mother not to leave her. Nazanin Zaghari-Ratcliffe, an Iranian-British reporter for Reuters who was visiting her mother in 2016 and arrested with her infant daughter at the Iranian airport, was separated from her child who had to be cared for by her parents. She was released last year after six years of imprisonment but faced new fabricated charges and was not allowed to leave the country, until she was finally released in March 2022 after the British government made a deal with Iranian authorities.

Two Sufi women activists imprisoned for their religious beliefs speak about the unbearable conditions of the notorious Gharchak women’s prison on the outskirts of Tehran, where the drinking water is salty and filthy and the stench of raw sewage is constant.

Such are the conditions of Iranian women prisoners. Mohammadi’s powerful book, however, shows not only the daily torture and the repression but also the resistance and the contemplation.

Although Iran and the United States are different in many ways, the issues of mass incarceration, solitary confinement, and the mental, physical, and sexual abuse of prisoners are common in both countries. We need solidarity between women prisoners and abolitionists in the United States and those in Iran.