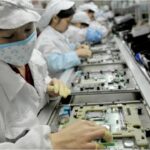 In October 2020, the Wisconsin Economic Development Corporation (WEDC) ruled that Foxconn had breached elements of its contract with the state to build a new LCD factory in exchange for $3 billion in tax subsidies. Rather than build the large, Gen 10.5 facility it promised, which would employ as many as 13,000 people, Foxconn built instead a much smaller Gen 6 facility and has failed to meet its contractual hiring targets. The WEDC concluded that the unusually small Gen 6 facility “may be better suited for demonstration purposes rather than as a viable commercial glass fabrication facility.” As a result, the WEDC cancelled Foxconn’s first subsidy payment. (See extensive reporting on this issue by The Verge, www.theverge.com.)

This news is a rare blow for Foxconn, which has grown to be the world’s largest industrial employer thanks in large part to the significant corporate welfare it has received from the Chinese government and others. Foxconn, of course, is contesting the ruling.

This incident, and Foxconn’s response to it, is typical of the company: It promises the world but delivers hell, as the authors of Dying for an iPhone lay bare. Based on undercover research at Foxconn factories across China; interviews with workers, line managers, government officials, students, and teachers; and the blogs, songs, poetry, and chat message confessions of workers, authors Jenny Chan, Mark Selden, and Pun Ngai illustrate how the economic successes of Apple, the world’s most valuable company, and Foxconn, China’s largest exporter, are interconnected and mutually dependent and are built upon the soul-crushing labor of China’s youth. Carefully balanced between first-person accounts from Foxconn workers and data-rich socio-historical and political-economic context, the narrative is poignant, compelling, and heartbreaking—doing the work that C. Wright Mills called for when he wrote about the need to recast “personal troubles” as “public issues.” Impeccably researched and engagingly written, Dying for an iPhone is an instant classic in the genre of workplace ethnography. Its academic rigor makes it a perfect university teaching text, and its tone and language ensure that it will succeed among the popular audience as well.

Centering the Voices of Workers

With Dying for an iPhone, Chan and her co-authors present the first-ever book focused on Foxconn. Yet, it is not a book about Foxconn, but about how Foxconn “controls and utilizes labor,” as told directly by workers. Based on research carried out from 2010 through 2019, the book is subtly framed by the scholarly analysis of global political economy and global value chains. In the context of China’s shift to a capitalist economy embedded in global systems of production and trade, the authors demonstrate how political-economic shifts created a “new working class” within China composed primarily of young, rural migrants to urban centers. Noting its million-strong global labor force, the authors paint a picture of Foxconn as a hungry monster that sucks in, chews up, and spits out China’s youth, with virtually no benefit to show for it. The book evocatively demonstrates how familial and personal relationships, labor and class politics, and even educational pathways and outcomes have been completely reconfigured by these shifts in Chinese society. More troubling, Dying for an iPhone, hardly a hyperbolic title, shows that outcomes of Foxconn’s brutal labor regime, including mental and physical injury, illness, and disease are widespread, and death on the job or as a result of it is not uncommon. Aiming to “assess the extent to which the Chinese state and global tech corporations fulfilled their responsibilities to protect workers in the context of transnational production,” Chan and her co-authors help workers to demonstrate that they unequivocally do not.

Dying for an iPhone begins and ends with the worker suicides that have occurred at Foxconn. The book opens with the first-person account of survivor Tian Yu, who was just 17 years old when she jumped from a Foxconn dormitory and is now paralyzed from the waist down. A migrant from a rural area, Yu recounts the isolation, exhaustion, and despair she experienced after just one month of working at the facility. At the end of the book, the authors rely on the poetry of Xu Lizhi, another Foxconn worker, who died by suicide in 2014, to similarly articulate the exhaustion and hopelessness he experienced prior to his occupational death. Both are examples of the book’s greatest asset: the profound respect that is shown for Foxconn’s workforce, manifested in the in-depth interviews, embeddedness in their communities, and long-term relationships that were necessary to bring such a rich portrait of humanity and suffering to life.

In between these two portraits, the authors demonstrate how the rise of Foxconn is typical of the “Asian miracle,” in which Taiwanese electronics firms established from the 1960s capitalized by first outsourcing production to China, where labor and the cost of production where cheaper, and thereafter, on the corporate welfare doled out by the Chinese state. Part of that corporate welfare package was the creation and maintenance of a massive pool of surplus labor. Initially this was through disinvestment in state-owned businesses, and later it was by supporting development of new Foxconn facilities inland, nearer to jobless rural populations where wages are lower than in the now-developed coastal areas. The state also coerces the labor of teenage students of technical colleges by pinning their educational standing and program funding to submission to Foxconn’s brutal labor regime. (What’s that Apple says about education being in its DNA?)

That regime is compellingly detailed throughout the book but comes into specific focus in a chapter that counterposes the day-to-day realities of working the production lines with Foxconn’s and Apple’s corporate propaganda. Readers may already be familiar with the conditions that are typical to Foxconn, which have now been widely reported in the media, by civil society groups, and academic researchers. What Dying for an iPhone adds to this well-known list of offenses is how Foxconn management rotates day- and night-shift workers every few weeks to disrupt their equilibrium and prevent them from forming the strong ties necessary to successful resistance. Foxconn’s increasing reliance on temporary and contracted workers and on the labor of student “interns” also serves this end as well as that of pushing down wages.

The authors also reveal that Apple, as Foxconn’s biggest customer, is squarely to blame for conditions within the factories. The production schedule, and quotas and cost cuts, imposed by Apple are shown to be the direct cause of the inhumane working schedules, unmeetable production demands, unsafe factory conditions, and lack of a living wage experienced by workers, as Foxconn prioritizes profits and placating Apple over workers’ safety and dignity.

The crux of the issue, the authors conclude, is that China prohibits trade unions. The corporate-run unions that stand in their place exist really to surveil workers and root out “troublemakers” who raise complaints. By prohibiting unions, harassing and imprisoning activists and journalists, and hampering the work of civil-society organizations, the state maintains and reproduces a large, flexible, and precarious labor pool. A detailed account of how the Chinese state channels labor disputes into an individualized judiciary process reveals yet another tactic that ensures that a labor movement cannot form. And, when it disregards the multitude of labor, human rights, and environmental laws that are broken in processes of production, the state placates large brands like Apple at the expense of its citizens.

In the absence of trade unions, workers and their families try in earnest to get justice via both official channels and protests. They engage in frequent protests—some riotous, some covert (slowdowns and intentional damage on the line)—which give the lie to those who claim workers are happy to have these jobs and that the current form of capitalist industrialization is good for China. The authors see hope and promise in this struggle and conclude by calling for a broad-based social movement in support of workers’ rights. Yet, they also demonstrate how workers’ demands are typically met with symbolic compromises that neutralize the unrest, rather than with meaningful change.

Opportunities to Do More

For its many strengths, Dying for an iPhone misses a few opportunities. While the authors do occasionally make the point that the conditions observed are common to the electronics industry generally and the realities of globalized production and supply chains more broadly, the subtle ways in which this is done may undermine the point. There is value to making this argument more prominently, lest readers come away with a picture of Foxconn and Apple as bad actors operating in an otherwise acceptable system. In the same vein, the narrative could do with a stronger connection to the global trade policies and corporate tax systems that provide the larger context and conditions in which Apple and Foxconn operate.

As a result, Dying for an iPhone leaves some lingering questions, like what allows this situation to continue? The authors make clear the roles of Apple, Foxconn, and the Chinese state here, but what about us, the readers, or our governments? What can we do about it? Pinning hope on workers alone to rise up seems a lot to ask of a population that has no time for anything but work or sleep and who suffer from mental and physical exhaustion as a norm. Telling the reader what they can do to hold accountable the global capitalist system that creates and maintains these conditions, in their home countries and around the world, might have made for a more meaningful conclusion for readers.

But perhaps that is asking too much, because Dying for an iPhone is an excellent book and fills an important gap in the literature. It would make a great gift this year, especially for someone who is expecting a new iPhone.